Spotlight on: Bella Oleme – the journeyman that became a UBO champ 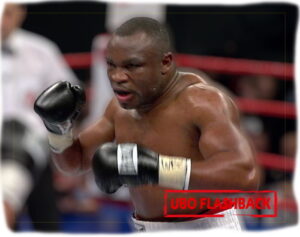 If anyone has ever deserved to be called a champion due to his service to the sport of boxing, Cameroon-born Frenchman Martial Bella Oleme is a prime candidate.

After winning his first tree pro fights, Bella Oleme transitioned into the near perfect journeyman, giving prospects and future champions a tough test. He was only ever stopped inside the distance once, and he also won fights here and there.

In May of 2013, he was rewarded with a shot at the vacant Universal Boxing Organization™ (UBO) International Cruiserweight title, in his home-town Noisy-le-Grand, against Georgian Giorgi Tevdorashvili (13-8-3, 8 KOs).

It was a scrappy, at times even messy, fight, but Bella Oleme was the busier man, and deservedly won a close unanimous decision. The journeyman had become a champion, after being a valuable part of the ring-education of so many future champions on the way up.

Bella Oleme retired after winning the UBO title, and he can forever consider himself a former champion. His 10-28-3 (1) record is by no means flashy, but he was much better than those numbers suggest. And the Universal Boxing Organization is proud to call him one of our champions!