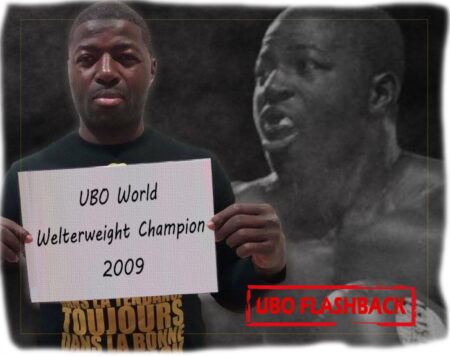 Cameroon-born Frenchman Hamza Issa made his professional debut in December of 2002. On July 4, 2009 he won the vacant Universal Boxing Organization™ (UBO) World Welterweight title, and then retired shortly after.

Before that, Issa had been through plenty of ups and downs in the ring. After fourteen pro fights, his record stood at a very unflattering 5-5-4, but from that point on it was almost only good nights in the ring for him.

He won and defended the WBF Intercontinental title in 2006, made a second defense in early 2007, and then captured the WBF World Welterweight title by stopping Filipino Dondon Sultan (16-7-2) three months later.

A successful defense of the WBF World title followed, but when Issa moved up in weight to try and win the same organizations world title at Super Welterweight in July of 2008, he was stopped in five rounds by Thailand’s Athit Praditphon (25-5).

Issa rebounded with a comeback-win over ten rounds, and in the summer of 2009 he was ready to go for his second world championship, the UBO World Welterweight title, against tough Frenchman Frederic Tripp (26-16).

The fight took place at the Ahmadou Ahidjo Stadium in Yaounde, the capital of his birth-country, and Issa put on one of his best performances.

He completely dismantled and stopped Tripp inside three rounds, much to the delight of the boxing-crazy Cameroonians at ringside.

Unfortunately, back in France, an eye injury made him decide to retire following examinations, with a professional record of 16-6-4 (7).

Reports of a comeback surfaced several times in the following years, and it has been claimed, but likely not verified, that he fought at least once after the Trip fight.