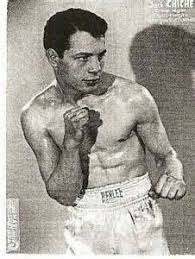 (by Marc at Boxe Time www.boxe-time.com)
Jacques Chiche is a French boxer born October 9, 1937 in Tunis. Her father Gaston was a tram driver and her mother, Julie, a teacher in a public school.

The family was well integrated into the Jewish community of Tunis.

At 11, encouraged by his neighbor Kid André (bantamweight) who trained in the gym of Joe Guez (who was the manager of Young Pérez), Chiche began to practice boxing, under the direction of Bill Smadja. At 18, he has already played 17 amateur fights, in flyweight then in lightweight.

He emigrated to Israel and performed his military service. he lives in Kibbutz Gezer and practices boxing at Maccabi Tel-Aviv (Israeli roosters champion and in 1957 gold medalist at the Maccabiades, the Jewish Olympic Games).

He fights 27 fights in Israel. He finally returned to Paris and resumed boxing there in 1961, trained by Jean Bretonnel and resumed the matches (against Yves Desmarets, January 1961 at the Central). After having played 71 fights, he retired and opened a venue in Paris (in the 19th arrondissement).

Sunderland ABC raises over £6,500 for Oliver, 6, who is living with cancer On this day: Marcelo Dominguez defended his WBC cruiserweight title