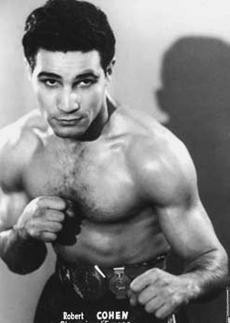 Robert comes from a family of ten children. He made his boxing debut and became very popular throughout Algeria. When he became professional, he signed a license with Gaston Charles-Raymond, one of the great managers of the time (with Bretonnel and Filippi). On November 6, 1953, Robert COHEN became French bantamweight champion by beating Maurice SANDEYRON on points. On February 21, 1954, he seized the European crown in Belfast against the Irishman John KELLY by ko in the 3rd round. On September 19, 1954, Robert COHEN got his chance for the world title but he had to travel to Bangkok and meet a certain SONGKITRAT, idol of a whole people. In the room which contained 70,000 spectators, there were only about thirty French supporters and only one journalist from our country: Georges PEETERS of the newspaper L’Équipe. Georges PEETERS was considered the pope of boxing as he knew this sport and boxers. TO THE TEAM, we had planned that Georges PEETERS would send a cable after each round and in the newspaper, we noted the presence of the former world champions CRIQUI, PLADNER and ROUTIS. Andrée, Robert COHEN’s sister, was also present.

Everything had been planned for the news to be announced as quickly as possible in the rue du Faubourg Montmartre, headquarters of the Team. But one thing had not been foreseen: the jet lag. So that we knew two hours before, that Robert COHEN had beaten, on points, in fifteen times, his Thai opponent. The emotion was too strong for COHEN’s sister who had to faint and be taken to the nearest hospital. We were to learn that COHEN had been injured in the right hand in the 5th round then in the browbone in the 8th round but that he had displayed enormous courage in the ring. The decision was indisputable and the clan of Robert COHEN who had spent five weeks there, liked to praise the sportiness of SONGKITRAT but also of the Thais on the whole. This fight had a big impact in France. Robert COHEN was the twelfth Frenchman to seize a world crown. At the time, there was only one champion per category. . Robert COHEN was therefore the best bantamweight in the world. The big boss of French boxing in terms of organizations (he was the boss of the Palais des Sports), Gilbert BENAIM then underlined: “The success of COHEN is more than a title which goes to France. It is a magnificent example for young amateurs, it is the essential impetus which will better stimulate the cause of boxing “.

What a beautiful time!

Jennifer Han: I’ve worked my whole life for this and I am ready Hughes vs. Straffon & Bateson vs. Garcia final press conference quotes