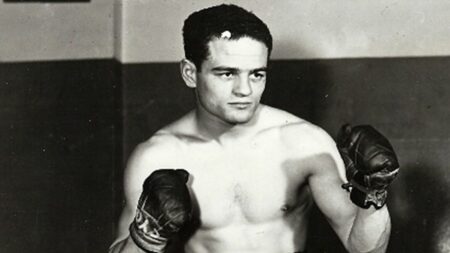 On November 12, 2006, Alphonse Halimi, one of the greatest French boxers, died after a long illness. The man nicknamed “the little terror” was born on February 18, 1932 in the Jewish community of Constantine, Algeria. Adept at street fighting, he carved out a solid reputation among the gangs of teenagers of Constantine. Very early on he identified with his model, the blackfoot champion Marcel Cerdan. A tailor by training and a member of a family of ten children, Alphonse Halimi quickly distinguished himself by his sporting eclecticism: he was not only an excellent boxer but also an emeritus swimmer. His determination and boxing skills do not go unnoticed. Very quickly, he joined the metropolis where he successively won three titles of champion of France in the bantamweight: in 1953, 1954 and 1955.

He quickly turned professional and it was under the rule of the one he called “Mr. Filippi”, his coach, that he entered the legend. On April 1, 1957, at the Vel’ d’Hiv’ in Paris, he defeated the Italian Mario d’Agata on points, thus winning the title of world champion in bantamweight. In the aftermath, on November 6, 1957 at Wrigley Field in Los Angeles, it is the American Raul “el Ratón” Macias who pays the price of “the little terror”. In front of more than 20,000 hysterical spectators, Alphonse Halimi won the unified bantamweight title. France will wait 32 years to see a national boxer achieve such a feat again. In the late 1950s, at the peak of his career, Alphonse Halimi fell. He was defeated in 1959, KO. in the 8th round, by Mexican Jose Becerra.

During the 1960s, he alternated victories and losses, while expanding his record with European bantamweight titles. Alphonse Halimi is aware of this, the biggest part of his career is behind him. And outside the ring, the multicultural European champion also knows how to make the national fiber vibrate.