Spotlight On Otto Wallin As He Fights Tonight Against Travis Kauffman 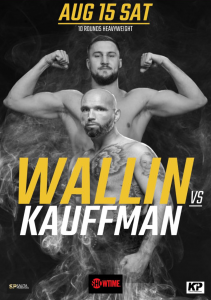 Swede Otto Wallin, the 29-year-old who was responsible for the horrendous cut on Tyson Fury’s face in their September 2019 clash is back in action tonight. Against Travis Kauffman, it will be one of the undercard fights on the David Benavidez vs Roamer Angulo card at the Mohegan Sun in Uncasville, Connecticut.

Though unbeaten, Wallin was a huge underdog and an unknown to most when he was brought in as a tune-up for Fury before his February 2020 rematch with Deontay Wilder. Fighting gallantly and pushing Fury much harder than expected, only to lose by decision (118-110, 117-111, 116-112) and leaving Fury with a facial injury that could of scuppered the rematch fight date that was set between Fury and Wilder for the WBC heavyweight championship of the world.

Eleven months later, he is back in the ring, this time faced with Kaufman who himself has been out of the ring since December of 2018 (a KO loss to Cuban sensation Luis Ortiz).

Assuming Wallin wins tonight (which he is expected to do) and a decision win for Wallin is the likely outcome, he will naturally be aiming for a rematch with Fury. With the circus that is surrounding Fury, Anthony Joshua, Deontay Wilder and Dillian Whyte (Whyte has been WBC No.1 mandatory contender for over 1000 days and the rest all want to fight each other whilst not obliging rematch clauses in place) the rematch he desires looks unlikely in the foreseeable future.

At best, this fight for Wallin will shake off the 11 months rust and will remind all of who he is, the once beaten Swedish heavyweight that pushed Tyson Fury hard. He will join the next tier of heavyweights that are waiting in the shadows of the heavyweight elite that need to sort out their merry-go-round of boxing supremacy.

“Hopefully, I will get a title shot,” Wallin said. “I mean, I really did well with Fury and better than anybody has. So, you can take that and look at it and say that I am one of the top guys, for sure. But where I stand, it’s hard to tell. But I definitely think that I’m one of the top guys and I’m happy to be back fighting again, and can’t wait to show that. And then, you know, the champions are tied up with themselves and stuff.

“We’ll see what’s gonna happen, but I feel like after the Fury fight nobody will have to take criticism for fighting me. So, they know that I’m good, hopefully, and they will give me another shot. I know that Fury, he’s always calling out a lot of guys, but he never mentions my name.”

“I think I got great momentum from that [Fury] fight because the world started noticing me,” Wallin said, “and I think a lot of people are keeping an eye on this fight to see how I do. … Like I said before, I’ve just gotta be myself and do my best and leave it all in the ring. And then I think it’ll come in place. But it will be nice, of course, to get a good win here and show everybody, like we said, that it wasn’t a fluke that time.”

Showtime’s entire original March card was canceled due to the COVID-19 outbreak.