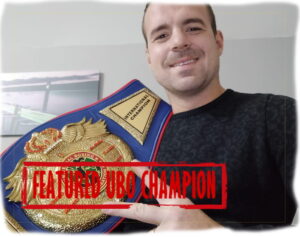 Universal Boxing Organization™ (UBO) International Cruiserweight Champion Christian “Demolition” Demaj (3-0, 1 KO) has, as is the case with many boxers, been greatly affected by the Covid-19 pandemic.

2020 and 2021 was supposed to be the years where the 30-year-old Germany-based Albanian moved his career towards European and world title opportunities, but instead he has been inactive since February 29 of last year.

On that night, at the Mehrzweckhalle in Kehl, he won the UBO title in a great battle with fellow undefeated prospect Robert Grguric (3-0, 2 KOs) from Croatia, prevailing by close majority decision in what was the 2020 UBO Fight of the Year.

While he is living in and fighting out of Germany, Demaj is still a very popular boxer in Albania. This was clear when he showed off his UBO belt and was celebrated by thousands at a public ceremony in Tirana a few days after winning it.

Prior to turning professional, Demaj had a distinguished amateur career, and represented the Mexico City Guerreros in the semi professional World Series of Boxing. So the plan was for him to move fast in the paid ranks, but its not been possible due to Covid restrictions.

He and his team are obviously hoping he can return to the ring soon, and pick up where he left off over a year ago.