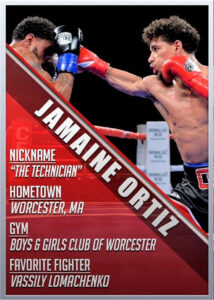 Undefeated Jamaine “The Technician” Ortiz
Made his bones in the amateur ranks vs.
Edgar Berlanga, Teofimo Lopez and Jaron Ennis
Success in amateur boxing doesn’t necessarily insure a great professional career. Some fighters are much more suited to be better pros than amateurs, most often power punchers, but it’s usually clear early on if a fighter is especially skilled or not.
Undefeated lightweight prospect Jamaine “The Technician” Ortiz (14-0, 8 KOs), fighting out of Worcester, MA, displayed his tremendous gifts in the amateurs against some of today’s most talented, young boxers.
Back in 2012, for example, 14-year-old, 106-pound Ortiz defeated the hottest pro prospect in the world today, 16-0(16 KOs) Edgar Berlanga, of Brooklyn, at the Junior Olympics National Championships held in Lake Placid, New York. Ortiz went on to win 100 of 114 amateur matches, Berlanga finished with a 162-17 amateur record. All 16 of the latter’s pro fights ended in the opening round.
Ortiz never dreamed that Berlanga would become the super middleweight monster that he is today for a good reason. “I didn’t have pros on my mind,” Ortiz remembered. “My goal was to win an Olympic gold medal. I didn’t see him at the U.S. Olympic Trials, but I did at a few national tournaments.”
Another Brooklyn-born fighter, unified world lightweight champion Teofimo “The Takeover” Lopez (16-0, 12 KOs), the 2020 Fighter of the Year, handed Ortiz a 3-0 loss on points at the 2015 National Golden Gloves Championship.
“If I had my coach in the corner – Rocky Gonzalez had to leave because of a pro commitment – I think I would have been able to beat him. He’s a power puncher now, but not when I fought him. I hope to fight him sometime because he holds the belts. I want to fight the top dogs.”
In Ortiz’ final amateur fight, he won a 2-1 decision against Abraham “El Super” Nova (19-0, 14 KOs), the former NABF super featherweight champion in the pro ranks, to be crowned New England Golden Gloves champion
“We’ve sparred after that,” Ortiz noted. “We go to his trainer’s (Hector Bermudez) gym in Boston a lot to get good work.”
Two other undefeated contemporary pros who were also standout pro prospects that Ortiz defeated in the amateurs are former NABF super lightweight Luis Feliciano (14-0, 8 KOs) and yet another Brooklyn native, super lightweight Richardson Hitchins (12-0, 5 KOs). Against Feliciano, Ortiz won 3-0 at the 2012 U.S. Olympic Trials, and he edged Hitchins, 2-1, at the Olympic Qualifier.
“The Feliciano fight was fairly easy for me,” Ortiz noted. “I’m not surprised by his success as a pro because he was a recognized amateur on Team USA. The Hitchins fight was competitive and he probably thought he won.”
Two losses in the amateurs against undefeated rising pro stars, welterweight Jaron “Boots” Ennis (26-0, 24 KOs) and bantamweight Gary Russell (18-0, 12 KOs), only enhanced Ortiz’ potential as a prizefighter. Both fights were scored 3-0 for Ennis in the Olympic Qualifier and Russell in the semi-finals of the Olympic Trials.
“I fought Ennis in his hometown, Philadelphia, and he beat me,” Ortiz commented. “He turned pro and started knocking out everybody. He didn’t stop me, though. I haven’t seen Russell fight in the pros.”
Ortiz is promoted by Classic Entertainment and Sports (CES). “I’ve been in this business a long time and affiliated with thousands of athletes,” CES founder/CEO Jimmy Burchfield, Sr. commented. “Jamaine has it all! He’s a perfect gentleman who has all types of experience against practically every type of boxer. Anybody who truly understands boxing can tell the difference about the special ones. He reminds me a little of Sugar Ray Leonard and looks like Oscar de la Hoya. He is the whole package with everything needed to be world champion.
“I love working with his team, Rocky Gonzalez and Carlos Garcia. They’ve all bonded. Team Ortiz is great to work with and I believe Jamaine has an unbelievable career ahead of him. Athletes of the 21st Century need more than in the past like a strength and conditioning coach and nutritionist. We have that for Jermaine.
Ortiz understands that there’s a world of difference between the amateurs and pros. “Styles make fights and pro versus amateur boxing is different,” he remarked. “We didn’t wear headgear in the Olympic Trials, but nobody stopped me. It seems like a lot of those guys I fought in the amateurs gained power in the pros and aren’t fighting as lightweights anymore (other than Lopez).”
The 24-year-old Ortiz is the reigning World Boxing Council World Youth and USNBC (U.S.) Silver lightweight champion. His stocked has skyrocketed since his spectacular performance this past November on the Mike Tyson-Roy Jones, Jr. PPV, in which Ortiz stopped Sulaiman Segawa (13-2-1, 4 KOs) in the seventh round of their high-profile fight.
“I’m back in the gym staying sharp and in shape,” Ortiz concluded, “working hard for whatever comes.”
Burchfield added, “Since his great performance on the Tyson-Jones PPV, we have been receiving all kinds of good offers for him. Jamaine Ortiz is a future boxing star.”
Ortiz’ special gifts were developed in the amateurs fighting opponents such as Lopez, Berlanga, Ennis and Co. Now, he’s making waves in the pro ranks, ranked No. 5 by the North American Boxing Federation (NABF), and cracking the WBC world lightweight ratings at No. 28.

Hector Flores Defeats Juan Carlos Parra & Boxing Results From Tijuana Lee McGregor: The Sacrifices Will Be Worth It