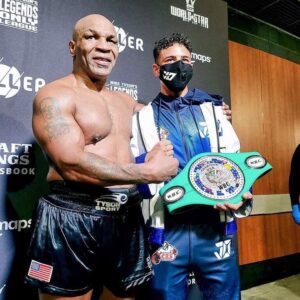 WORCESTER, Mass. (December 14, 2020) – Prior to his sensational performance on the recent Mike Tyson-Roy Jones, Jr. pay-per-view event, undefeated lightweight prospect Jamaine “The Technician” Ortiz was boxing’s best kept secret. No more, though, as Ortiz firmly established himself as a rising star in front of countless fans among the 1.6 million PPV buys.
Ortiz flew from Boston to Los Angeles on Thanksgiving. He was driven to his hotel, where he immediately saw Jones, checked his weight, and walked to Staples Center. “I was comfortable from the start,” said the young fighter who was fighting for the first time as a professional outside of New England. “I was there to get the job done. I was on a mission. I walk to see the Staples Center and that was cool. I later took my run around the Staples Center and there were a lot of statues. It was beautiful. It was cool seeing the Lakers locker-room.”
The 24-year-old Ortiz (14-0, 8 KOs), the reigning World Boxing Youth World champion, knocked out Sulaiman Segawa (13-3-1, 4 KOs) with a bruising body attack, hurting his opponent in the sixth round, and closing the show in spectacular fashion in the seventh for the vacant World Boxing Council (WBC) USNBC (U.S) Silver lightweight title. Segawa had never been stopped before as a professional.
Ortiz displayed his overall arsenal: stiff jab, lightning quick hands and feet, switching back and forth effortlessly from orthodox to southpaw stances, punishing hooks up and down, and the most lethal body shots seen from a New Englander since “Irish” Micky Ward.
“I was calm and cool before the fight,” Ortiz added. “I like to go into a fight, mentally, like it was a sparring session and I always do good. I started out in an orthodox stance, established my jab and used it a lot. I think I should have used it more and could have beaten him with it. I listened to my coach (Rocky Gonzalez) and he told me when to switch. Body punching is the No. 1 thing with Rocky. I may not have shown it nearly as much in other fights, but he drills that into me all the time. In the sixth round, he told me to go more to the body, not looking to catch him, and in the seventh I really hurt him to the body.
“Segawa was definitely tough. He had beaten a lot of guys, including a few he upset. Every fight is a stepping-stone and I’m my worst critic. I felt that I could have knocked him out in the second round, but I didn’t want to go off the game plan.”
Ortiz set-up Segawa from the opening bell, broke him down, and finished the show in grand style as Seqawa was hurt and trapped on the ropes, drawing kudos from highly respected people in the industry such as “Sugar” Ray Leonard, Teddy Atlas, and others. Ortiz’ fan-base grew exponentially as boxing fans rushed to sign up to follow Jamaine during and after his breakout fight.
“Once people saw me perform and my style,” Ortiz continued, “they liked me. I could have shown more and thrown more combinations. I really needed to fight in front of the world. I got 5,500 new Instagram flowers that night. I guess, I’m no longer the best kept secret in boxing.”
“Our main goal is to win a world title,” Gonzalez commented. “This was fun and a great opportunity, but the motivation to be world champion is stronger. He dealt with this fight as just another fight, and he followed our game plan.
“His body shots set up the ending. I’m always telling him about Micky Ward’s body shots. You know, boxing is a dance, a salsa. Boxers need to dance; I don’t think they should just be orthodox. They all need to fight the other way and when Jamaine switched stances in the third, he never let up. I’ve trained him hard. I’m always on him and what better way to shut me up than ending it like he did on pay per view? It was a drop the microphone moment!”
Ortiz is promoted by Jimmy Burchfield (Classic Entertainment and Sports) and advised by Richard Shappy and Eddie Imondi.
Because of the uncertainty in boxing due to the pandemic, Ortiz’ 2021 schedule is unknown, but he isn’t boxing’s best kept secret anymore, “The Technician” is a bonafide rising star.