Steen vs. Agbeko – SHOBOX: The New Generation this Friday 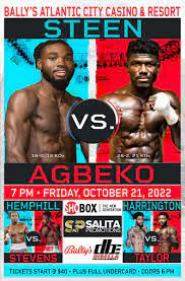 SHOBOX: THE NEW GENERATION FIGHT-CARD UPDATE: SHOWTIME SPORTS® popular prospect series SHOBOX: The New Generation® returns to Bally’s Atlantic City Casino and Resort, site of the first SHOBOX® 21 years ago, for the second time in two months this week with an exciting tripleheader featuring four undefeated fighters with a combined record of 82-3-3.

In the main event, fast-rising blue-chip prospect Isaiah Steen (16-0, 12 KOs) will get a chance to slingshot himself up the super middleweight rankings when he takes on dangerous power-puncher Sena Agbeko  (26-2, 21 KOs) on Friday, October 21 live on SHOWTIME® at 9:30 p.m. ET/PT. Both Steen and Agbeko are SHOBOX alumni as the heavy-handed Agbeko faces Steen in the 10-round main event at 168 pounds.