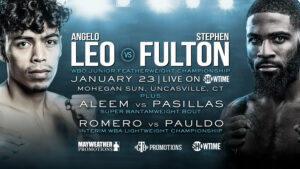 Fight Notes: Sparrow was down in round 1. Sparrow was also deducted 2 points for an intentional low blow in round 6. In the 7th round, the bout was halted via a corner retirement 43 seconds into the round.

Fight Notes: Scores were 77-75 x3 for a Carter unanimous points victory for Carter.

Stephen Fulton Jr. “It feels good. I told you that I would engage more in this fight. I boxed a little but I engaged more to show him that I’m better than him at what he does best. I’m used to dealing with fighting inside the gym, inside the ring. Everyone I’ve fought tried to bully me. This time I did to them what they try to do to me. And I got the job done.

“I wore him down by attacking his body and pushing him back. I had to change the whole narrative, push him back and dropping those uppercuts in. That’s how I got the job done. From like the fifth round, that’s when I knew I was going to take off. I never got tired from engaging.

“After a year off, I feel I did a good job but I could be a lot better, a lot sharper. I want Luis Nery, Brandon Figueroa. I want all the champions. I want to be undisputed.”

Raeese Aleem Quotes: “I was dominant. I wanted to put an exclamation point with this performance. It feels absolutely amazing. It just confirms what I knew in my head, that I have elite power. He’s one of the top fighters in the division so to knock him out, it means I’m a true threat.

“I think a lot of people were sleeping on me and my power. I wasn’t surprised that I stopped him, I didn’t think he’d be able to go the distance with me. I think a lot of the fighters in this division should really be on notice.

“It doesn’t matter who I fight next. I’m ready to fight any world champion. Whether it’s Fulton or if Murodjon Akhmadaliev wants to come out of hiding. Any current world champion that’s willing to fight, I’m ready. I’ve got the pen, send the contract.”