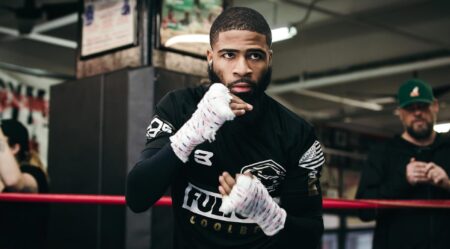 Fulton will square off against WBC Super Bantamweight World Champion Brandon Figueroa in the main event, while Aleem battles Mexico’s Eduardo Báez in the co-main event of the telecast, which begins at 10 p.m. ET/7 p.m. PT.

Tickets for the live event, which is promoted by TGB Promotions, are on sale now and can be purchased at ticketmaster.com.

Here is what Fulton and Aleem, who are both training in Las Vegas for Saturday’s matchups, had to say at the media roundtable this past weekend:

“When I fought out in Nevada during the amateurs, I knew I would be back here fighting in Las Vegas one day as a pro. This has a totally different feel to it but I’m just focused on getting the job done and winning.

“I feel like this is what I’m supposed to be doing right now. I’m here for a reason. I’m not going to let the bright lights get to me. I was made for this and I take that mindset into the ring.

“Once I turned pro, I was on the path to becoming world champion. I’ve won a world title in the division I turned pro in, and now I’m unifying in my first fight as champion. I want to keep pushing forward and become undisputed at this weight class.

“Everyone has a different path and for me that’s been taking dangerous fights against undefeated opponents. That’s made me a better fighter. Maybe I shouldn’t have taken some of those fights, but now I’ve got this resume that can stack up against anybody.”

“I’m extremely excited to be back doing what I love to do and to be fighting on a big SHOWTIME card. I’ve been getting great sparring out here in Las Vegas and I’m absolutely ready for Saturday.

“I’ve been working on really taking my time in the ring. Even if I’m being aggressive, I’m still taking my time while doing that. If I had taken my time against Vic Pasillas in my last fight, I would have stopped him in the sixth round. I was pushing the pace when I didn’t have to.

“I would love to fight Stephen Fulton. I believe that I’m the best in the division and some people think that he’s the best. If he wins this fight and I win Saturday, that’s the fight I want next. I’m ready to make it happen.

“I just have to keep winning and make big statements in every fight. I’m going to keep earning more recognition. I’m just starting to show people who I really am and I can’t let up.”