Steven Ward Discusses The Bout With Hafthor ‘The Mountain’ Bjornsson 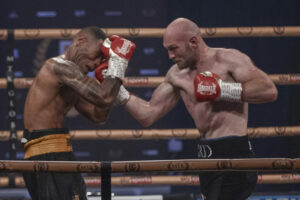 Steven Ward is still having to pinch himself as he prepares to take on former World’s Strongest Man Hafthor ‘The Mountain’ Bjornsson in an exhibition bout next week.

The clash between Ward and Bjornsson will see the strongman get some rounds under his belt as he prepares for his showdown with bitter rival Eddie “the Beast” Hall later this year.

Ward is excited for the battle, and the former WBO Intercontinental light-heavyweight champion has opened up on what he expects to happen.

Ward said: “I’m looking forward to doing something new. I’ve never been in the ring with someone this size, so it will be interesting to see how it pans out.

“Initially it was just going to be some sparring and I was going to help him out with that technical aspect, but it’s escalated from there and the next thing we know I’m doing an exhibition with the former World’s Strongest Man!

“I have seen him in the gym twice and he was hitting the bag and moving well for being such a big guy. I didn’t expect him to move as well as he did, but he told me he was a professional basketball player at one point, so that explains why he’s got some good agility.

“Training for this has been different. It’s 3 x 3 minute rounds so it hasn’t been the way it normally would be for a camp, but I’ve been able to eat a bit more and enjoy training a bit more, so I’m looking forward to it.”