Steven Ward vs. Hafthor “The Mountain” Bjornsson Heads to Dubai 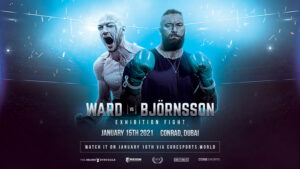 The exhibition bout between Steven Ward and strongman Hafthor ‘The Mountain’ Bjornsson will now take place in Dubai next week.

The fight was originally due to take place in Iceland, but due the current COVID-19 restrictions in Europe, the location has switched and it will be held at Conrad Dubai.

Viewers will be able to watch the fight on January 16 via coresports.world (exact time to be confirmed), as Bjornsson prepares for his upcoming grudge match with fellow strongman Eddie Hall.

Bjornsson and Hall are set to square off later this year in a fight being dubbed as ‘The Heaviest Boxing Match in History’ – with the man known as ‘the Mountain’ getting some rounds under his belt by getting into the ring for an exhibition with former WBO European champion Ward.