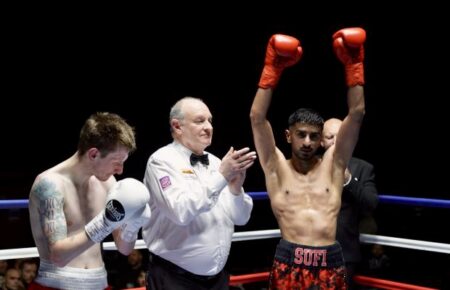 Sufi Ahmed says no-one should be fooled by his last performance, ahead of his clash with Michael Gomez Jr for the Central Area Super Featherweight crown on November 5 at Tottenham Hotspur FC’s Banqueting Hall.

The pair will meet as chief support on a huge night of boxing, headlined by Hannah Rankin attempting to become a two-time, double world champion when she faces Sweden’s Maria Lindberg for the IBO and WBA Super Welterweight Titles – with all the action live on Fightzone.

In a sizeable upset last time out in August, Sufi came unstuck on his Sheffield home turf over four rounds to one-bouter Jahfibus Faure … who was subsequently stopped just a few weeks later by his upcoming opponent, Gomez Jr!

A fired up Ahmed says he will be a different animal with Gomez Jr in the opposite corner.  Sufi, 27, turned pro in 2018 and has looked very decent, racking up five wins before subsequently tasting defeat twice. His first loss was a contentious one in December 2020 when he challenged for the same title he will battle Gomez Jr for, losing to previous champ Kane Salvin in a points defeat that many thought he deserved to win. The second loss to Faure is undoubtedly a setback, but the John Fewkes trained fighter believes he will get salvation on November 5.

Gomez Jr is the son of former British champion, Michael Gomez. Having lost just once in 15 contests, the Manchester man is by far the more experienced fighter and would represent a huge scalp for Sufi if he can come out on top in their much-anticipated battle.

Watch below as Sufi chats ahead of the fight: