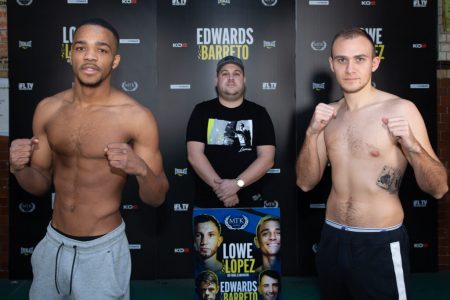 Shiloh Defreitas made a big impact when he entered the paid ranks in October – and he has vowed to do the same again when he returns against Dario Borosa on Friday’s stacked #MTKFightNight.

Rising star Defreitas (1-0, 1 KO) meets Borosa as part of a huge card at York Hall in London, which is headlined by an IBF featherweight title final eliminator between Isaac Lowe and Luis Alberto Lopez, and will be broadcast live in the US on ESPN+ in association with Top Rank, and worldwide on IFL TV.

The man known as ‘Sugar Shy’ claimed a dominant stoppage win over Fonz Alexander during his professional debut, and he is looking to continue that with another dazzling display tomorrow night.

Defreitas said: “I’m over the moon to be back out fighting before Christmas, and a bit of extra money in my pocket certainly won’t hurt!

“I was pleased with my debut. I took my time, picked my shots well and executed it with a great combo at the right time. Whether it sent a message or not, everyone will soon realise I’m not here to play with anybody. Anyone can get this work.

“The build up hasn’t changed though, I’m still focused on the task at hand. In my head I’m fighting a man that’s coming to win so I’m just focused on winning and giving everyone some Friday night entertainment.

“The army of fans is ready, and everyone locked in to see what I bring this time around, but more than anything I’m fully focused and plan on putting on a show.

“It’s still early days and I plan on having a long career. We’re pushing for 6 to 10 fights in my first year as a professional, and I want to be as active as possible.”