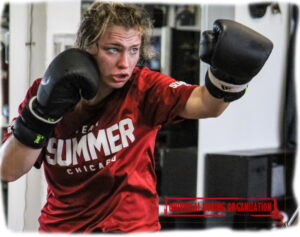 Building up to the Universal Boxing Organization™ (UBO) World Welterweight title fight in Davenport, Iowa on August 14, we have asked both boxers the same five questions.

Yesterday we got answers from Brenda Gonzales, and today we see what Summer Lynn had to say.

Q: Tell us about your background in sports before turning pro boxer?

A: Before I started boxing, I did jiu-jitsu, wrestling and judo. I did that until I was fourteen.

When I was around twelve I decided I wanted to start learning stand up, so I found Body Shot Boxing Club and never left.

Q: Who inspires you?

A: My teammate Jessica McCaskill inspired me. After her debut our coach got a painting of Jessica, and when I saw that I wanted one too. The only way to get on the wall is to turn pro, so that was my mission.

Now seeing Jessica with all the belts I told myself I want one, and now I get a chance to.

A: That’s actually a hard question. I hardly eat cheesecake so I guess I would pick cheesecake to taste like dirt.

Q: What are the most important things for you to be at your best?

A: To have the right people around me. People who want to grow and have the will to win. Like the saying goes, “who you surround yourself with, is who you become “.

Ever since I was younger I surrounded myself with top tier athletes, even though I didn’t know at the time. Girls that I met in jiu-jitsu are now on the USA wrestling team, another girl I knew is on the USA judo team.

And my parents, they have always played a big part in my sports. They always support me, and drove me everywhere I needed to go to be the best I could be.

Q: Without giving away your game-plan, what will make you victorious August 14?

A: I think the way I will win is from the way we train. We are always training to be fight ready. I also think having fights back to back will help.