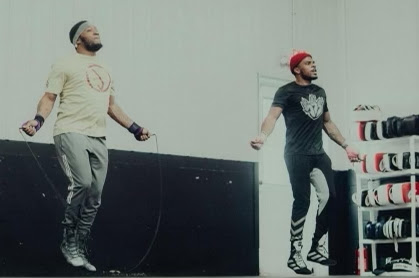 Fighting out of Pittsfield (MA), the two members of Granite Chin Promotions’ growing stable got a relatively late start in boxing, both turning pro June 26, 2021, in Derry, New Hampshire. They have fought together two times and will do so once again June 25th on “Road 2 Stardom,” presented by Granite Chin Promotions, on the first day-night professional boxing doubleheader in Massachusetts history. It’ll mark the first time the Sumpters have fought together in the Bay State as professionals.

Boxing fans will be to watch both shows via live stream, from the Sheraton Hotel in Framingham, Massachusetts, at BXNGTV.COM for only $24.99.

“When Gunther Fishgold (the Sumpter brother’s manager) called me last year saying he had these two brothers from Pittsfield that I should take a look at,” Granite Chin president Chris Traietti said, “I didn’t hesitate because Gunther has been around the sport a long time and he has an eye for talent. I was immediately impressed with both guys and was eager to have the, be part of Granite Chin. They have been a blast to promote. Neither wants to be spoon fed, they want to hunt. They want bigger and bigger fight each time out, which as a promoter, makes my job a lot more enjoyable. They are hungry, humble, and they just get it. To make meaningful money in boxing, fighters need to take on meaningful fight. The future is bright for these guys.”

Steve is headlining for the first time, in his initial scheduled 8-round bout, against Florida veteran Manny “Shake Em’ Up” Woods (17-6-1, 6 KOs) on the matinee card. “I feel good about it and I’m ready to step up,” Steve said about headlining in his first scheduled 8-rounder. “We’ve talked about 10-rounders. We’ll see how this goes and from there see what happens.

“I’ve seen him fight and I’m not worried about anything. He may have more experience, but that’s not going to work. He’s just another obstacle for me to get past. I’m more patient since my pro debut. I was a little frantic, too eager, and now I’m more selective. There’s always room for improvement, though, offensively, defensively, all-around. I want to keep improving in every way.”

Before Steve steps into the ring for the main event, Quinton will already have fought in his first scheduled 6-round bout versus Tracey “The Titan” Johnson (4-10-6, 0 KOs), the brother of world champion Demetrius “Boo Boo” Andrade.

The 33-year-old Quinton, who is 4 years older than Steve, is coming off an upset victory against highly touted Timothy Hatfield (3-0), the 2-time New England Golden Gloves runner-up from Rhode Island, via a 4-round majority decision.

“I felt disrespected,” Quinton explained. “I felt like they looked at film and felt he could beat me. They chose me out of everybody. We were both undefeated and I fought in him his backyard. I stepped up for the fight. I’m a smaller heavyweight, 225 to 230 pounds (Hatfield is 6’ 7”, 240 lbs.), but once he felt my power in the first round, he became timid, and when he threw his jab, I countered. I love being the underdog.”

Quinton enjoys fighting on the same card as his brother, too. They were teammates on sports teams growing up, which competitively drove them to succeed, more recently as pro boxers.

“It’s good,” Quinton spoke about being one-half of the Sumpter brothers act. “We’ve competed with each other all our lives. We’ve been on the same teams. We haven’t faced adversity, neither of us have lost. We’re embracing it. I’m more than happy with the way I’ve been moved. Pittsfield is going to be in the house June 25th.”

Intra-state rivals Nathan Balakin (3-1, 1 KO), of Tyngsboro, and Attleboro’s Bryan Urday (2-1) throw-down in the 6-round co-featured event for the vacant Massachusetts Welterweight Championship.