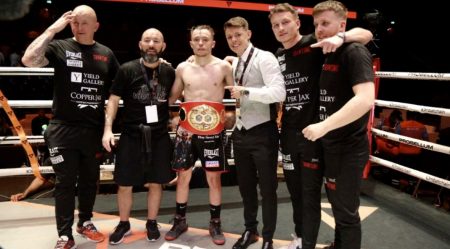 Sunny Edwards successfully retained his IBF flyweight title as he took part in the historic Probellum Revolution event on Saturday.

The action-packed card was held in front of a huge crowd at the Coca-Cola Arena in Dubai, and was broadcast to millions of fans across the globe, with the very best fighters from around the world on display.

Some of the biggest names from the world of boxing were in attendance, including Roy Jones Jr, Michael Buffer, Regis Prograis, and new Probellum signings Pat and Luke McCormack, along with celebrities such as Abdu Rozik and Adam Saleh.

The main event saw Edwards put on a masterclass to defeat Mama, while the card also saw victories for the likes of Bakhodir Jalolov, Jono Carroll, Anthony de Bruijn plus many more. The full details and results can be found below.

Sunny Edwards once again displayed his elite boxing skills as he defeated Jayson Mama to make the first defence of his IBF flyweight title.

Edwards (17-0, 4 knockouts) was a level above throughout the fight, even overcoming a nasty cut early into the contest that could have potentially caused an issue.

The 25-year-old ensured that wouldn’t be the case though, dominating proceedings and putting the exclamation point on the performance by dropping Mama (16-1, 9 knockouts) in round 10.

Mama lasted the distance, but there was only one winner in the end, with all three judges scoring it heavily in the favour of Edwards, as he extended his unbeaten record in style.

“In the second round my right eye was completely covered in blood at one point, but I’m a warrior and came through it,” said Edwards. Mama is a great fighter and a great contender, and I’m sure his time will come in the future.

“I came here to fight Mama, and I did that and prepared hard and trained diligently, but I want to be in the big fights now. I want the Ring Magazine and WBC belt. That was my mandatory, and now I want Julio Cesar Martinez. I’m coming!”

“To all of my fellow countrymen, thank you for supporting me,” said Mama. I’m sorry I didn’t get the win, I did my best but it wasn’t enough. Sunny Edwards is a great champion and a talented boxer.

“He’s smart and fast, but next time I will come back stronger. I promise you all I will go back to the Philippines and train hard for the next opportunity.”