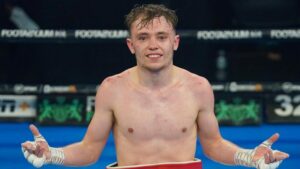 The two men will go head to head on a Queensberry Promotions show in London, live on BT Sport, with Edwards making the first defence of his world title.

Edwards (16-0, 4 KOs) won the title with a unanimous decision victory over Moruti Mthalane back in April, and now faces a tough test in the form of unbeaten Mama (16-0, 9 KOs).

The Filipino stepped aside to allow that clash between Edwards and Mthalane to take place, and now looks to build on the 16 wins he has earned in his career so far.

Promoter Frank Warren said: “This is a bit of a step into the unknown against an unbeaten fighter who will be as confident of victory as Sunny was against Mthalane. Jayson Mama was good enough to step aside to allow Sunny his shot at the South African great and now it is his turn to attempt to upset the odds.

“To my mind though, Sunny is the best flyweight on the planet and this is just the beginning of a glorious reign as champion. He wants to unify and win the Ring Magazine belt and we will look to do that, but he has this mandatory obligation to navigate through first and he cannot take anything for granted.

“After winning his title in an eerie atmosphere, it would be fitting if the public really come out in their numbers to support Sunny on his journey as world champion and I hope the Copper Box is full to the rafters in recognition of his achievements.”