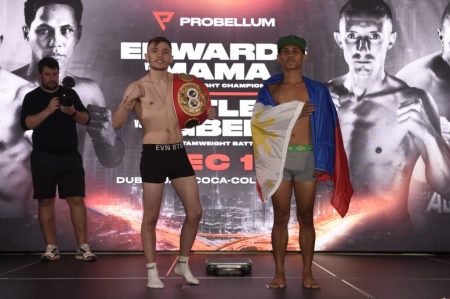 Sunny Edwards was in tremendous condition as he successfully made weight ahead of his IBF flyweight title defence against Jayson Mama tomorrow night.

Edwards (16-0, 4 KOs) faces Mama (16-0, 9 KOs) at the Coca-Cola Arena in Dubai, making the first defence of the belt he won against Moruti Mthalane back in April.

The weigh-in took place on Friday, with Edwards coming in at 7st 13lbs 5oz, while Mama was identical, also weighing 7st 13lbs 5oz.

The card will also see Paul Butler return to the ring, as he faces Joseph Agbeko. Butler was originally set to take on John Riel Casimero, before Casimero was hospitalised and unable to compete.