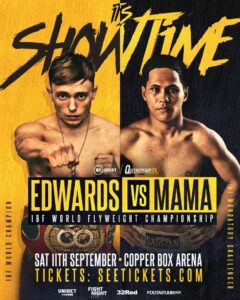 Jayson Mama has accused rival Sunny Edwards of running from an old man in his title winning performance.

Mandatory challenger Mama (16-0, 9 KOs) stepped aside so Edwards (16-0, 4 KOs) could challenge Moruti Mthalane for the title in April.

Edwards delivered one of the best performances so far this year thrashing the South African on points.

Mthalane had been unbeaten for more than 12 years, but Mama scoffed: “Mthalane was old.

“Edwards was running all night. I hope he doesn’t run when he fights me but I think he will run from me.”

Mama, 24, hails from General Santos City home all-time great Manny Pacquiao and believes he can take over from Pacquiao who is considering retirement as the Philippines next big boxing star.

He has prepared at the Sanman gym close to his home under trainer Ronerex Dalut and strength and conditioning coach Ronerex Dalut.

Despite being critical of Edwards tactics against Mthalane, Mama admits: “Edwards is a great boxer but I have trained really hard to bring back the belt to the Philippines.

“I will be a World champion on September 11.”

Mama warmed up for his big fight against Edwards with a eight round retirement win against Romshane Sarguilla in April – the challenger’s third inside the distance win in his last four fights.

Tickets available from £55 via SEETICKETS