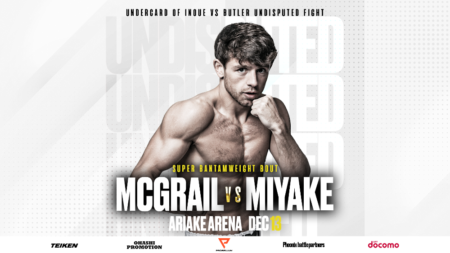 Peter McGrail will have “unfinished business” on his mind when he fights on the undercard of a monster show in Japan this December.

The brilliantly gifted super bantamweight has secured a place on the undercard of the huge undisputed world bantamweight title showdown between Naoya Inoue and Paul Butler in Tokyo.

McGrail returns to Japan on December 13 ready to draw a line under the disappointment of his Olympic exit in the country last year and show the world of boxing why he remains destined for the pinnacle of the sport.

The Liverpool fighter headlined his first show at Probellum Liverpool II on Saturday night, and delivered a performance worthy of his billing, as he broke the spirit of Alexander Espinoza and forced him to retire at the start of round six.

McGrail (5-0, 4 KOs) now turns his attention to an eight-round contest with Hironori Miyake at the Ariake Arena and ending 2022 with a bang in Japan.

“The last time I was there, I had a belter of a trip with the team, a trip that will be me for the rest of my life, and I’m proud of where I got to, as an amateur and going to the Olympics, but I just feel as though I’ve got unfinished business.

“And it would be nice to go over there and get the win. I should’ve got a few wins when I was there last time, but it’s a different game now, that was the amateurs, but I’ve got unfinished business.”