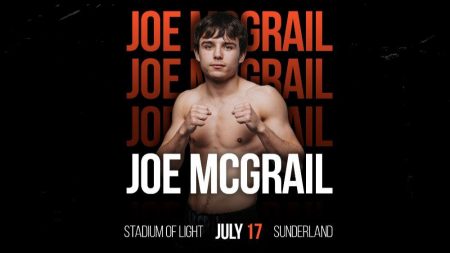 Joe McGrail will box for a second time in just 15 days after being confirmed to fight in Sunderland next weekend.

The Liverpool super bantamweight defeated Stefan Nicolae in Barnsley at the start of the month and is next in action on Sunday, July 17 at the Stadium of Light, on a Phil Jeffries promotion.

McGrail overcame illness in the build-up to his last contest to win comfortably on points and is raring to fight as often as possible to speed up his education in the pro ranks, after he left the amateurs in December.

“I want as many fights as possible by the end of the year, at least two but hopefully three, and I feel I am ready to move onto six rounders now,” said McGrail, who is 4-0.

“I feel as though I could’ve done six rounds in Barnsley, even though I had been ill, so I am ready for that step up.

“And so, I’m really happy to be getting the chance to box again, so soon after my last fight, on this show in Sunderland.”