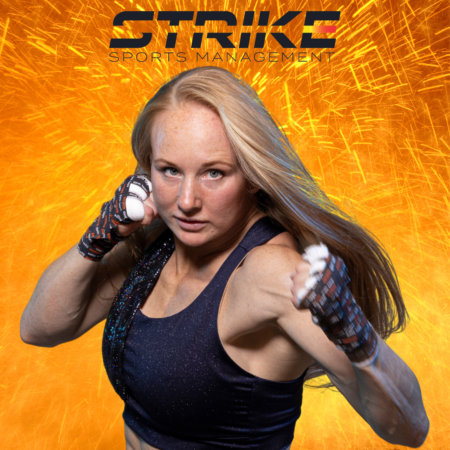 Dedicated and determined in equal measure, Lucy Wildheart, the aesthetic and powerful 5ft 5 ½in Scandinavian storm claims she has both the skill set and mindset to conquer the 126lb division.

‘My nickname represents the strength of Sweden’s medieval Vikings. As a kid, I was ‘all or nothing’. I had a mental temper but could also be really kind. I was, and still am, super competitive and always spoke out if something appeared unfair. I’d not hurt anyone but I always said my thoughts, never backed down. I had to have the last say and would scream and shout. It caused me problems at school.’

‘My parents separated when I was pretty young and we didn’t have much money. The nearest town had around 3,500 people and I was surrounded by farms and forest. I was always outside, falling off trees. I didn’t have a mobile phone until I was much, much older. My grandparents, who played a big part in my upbringing, had horses and cows and I was raised around nature and hunting.’

Her combative urges were initially satisfied through Shotokan karate.

‘At aged nine, mum took me to karate school where the trainer, still my hero today, was really hard on me. Shotokan gave me something to focus on. It was very traditional. We bowed, spoke Japanese and we focussed mostly on katas and technique. Coach taught me life skills and respect.

‘I became very good, very quickly because I was very coachable and learned from copying others. That karate dojo was a place where I could finally be me and I never missed a session. One time when I broke both feet, and still went and just trained with my arms.

I’ve thought of trying out for the MMA and the UFC. I’ve already done a bit of grappling. I might have a bit of success there.’

Aged 19, Lucy was forced to leave town in search of fresh employment and, with no dojos in sight, opted to dabble with the Noble Art instead.

‘Initially, it was very difficult because, for karate, I had a wide stance and my legs were my strength. I really struggled for the first four years but I refused to give up,’ recalls Wildheart, who won 24 of 27 amateur starts, several Golden Girl titles and represented Sweden right across continental Europe before succumbing to the paid brigade in 2017.

She explains: ‘I wanted to go the Olympics but didn’t have the patience to wait another four years. I was ambitious to move fast and be involved in longer fights that would give me a proper work out.

‘My goal was always to train full-time but professional boxing was banned in Sweden and there were no sponsors. I knew I had to move to either England or the US to make it. England was nearer. I’d had the opportunity to box on the undercard of (ex-British and European super-lightweight king) Colin Lynes and he assisted my passage.’

In addition to her birthland and Britain, Wildheart wandered to Poland, France, Ghana and Malta to secure low-paid action in her opening nine fights.

‘Being from Sweden and not having an Olympic background, I’ve not had an easy road,’ disclosed the former IBO Inter-Continental champion and IBO lightweight challenger.

‘All my fights have potentially been difficult but I’ve taken every opportunity that has been offered to me and made the best of it. The travelling has allowed me to see and experience different things.’

Her recent alignment to Maynard’s Strike Sports Management will provide the much-needed stability required for a concerted assault on global honours next year.

‘Long term, from my career, I want to be able to get a house, stables and a black horse,’ speculates Wildheart.

‘I also hope to win several world titles, undisputed, and be proud of myself, knowing I achieved everything I wanted to, Then I’d love to teach all the young women boxers out there, not just coaching but contracts, negotiations….’

With just one contentious defeat in 11 pro airings, clearly the Swede is more than a pretty face. She boasts the nimble feet expected from her study as a ballerina that earned her a position at the prestigious Swedish Academy, but turned it down to move to the UK to further her boxing career. In addition, her four stoppages (secured in two-minute rounds) are testament to the explosiveness acquired from years of competition at elite level Cross-Fit.

She does not lack for confidence or commitment.

‘I aim to perfect the craft of boxing,’ concludes the Samm Mullins coached starlet who takes on Sakhorov over eight-rounds in a crucial must win fight to enter 2023 in World title contention.

‘I’ve got a really nice shape and a fitness level that allows me to keep my skill level high for the full duration of a fight. I do whatever is needed to win but can change quickly if things aren’t going fully to plan.

‘I’ve a good style. I’m explosive but can also be a bit tricky. Plus, there’s several unshown aces in my pack. So far, I’ve just shown 30%. I guarantee there’s going to be some hot fights coming out of me!’