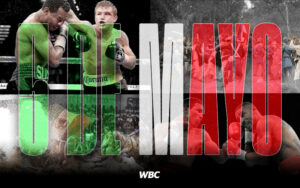 It is a reality that the most popular sports in the world have a constant calendar year after year, with specific dates in which their biggest events are presented, causing the world to stop and be fascinated by elite sports events.

Football has the Super Bowl in February, the Baseball World Series takes place in October, the Champions League Grand Final is held in May. Following this pattern, boxing also has specific moments with the biggest fights of the year; However, something magical happens in our sport, as we have two dates in which we can watch boxing at its highest level: May 5 and September 16.

But … Why are these boxing dates on the calendar closely related to national festivities of the people of Mexico?

On September 16 (1810) the “Independence of Mexico” is commemorated. This date is distinguished by being a festivity full of folklore, dance and regional food. On this day the heroes who gave their lives to form the Mexican Republic are remembered.

On May 5 (1862) the Battle of Puebla is commemorated, a war chapter that recalls the day the Mexican army defeated a numerically larger, but not superior French army. This celebration has acquired a new cultural dimension in the United States of America, as the Latino population celebrates on this day the pride of belonging to this community. A day where their work, their dedication, their worth, their identity and above all, their indomitable spirit are recognized.

The migrant force in the United States, and the sport were intimately linked so that these specific dates, became a tradition in the scene where Mexican culture and boxing converge in a unique way by giving them a special meaning and significance: the Latin celebration and the realization of the most impressive boxing fights with the best fighters.

The boxing cards in Las Vegas allowed these dates to be highlighted as the most transcendent in boxing, and for more than 30 years, the most important fights in the world take place towards May 5 and September 16.

It is also for these reasons that the World Boxing Council, since 2017 implemented the creation of a special commemorative trophy for May 5 and September 16, with the intention of serving as a majestic recognition of Mexican culture and the winner of the most important fight held in these periods.

Here is a non-hierarchical list of some of the best fights held towards May 5.

Floyd Mayweather vs. Marcos Maidana I; 2014