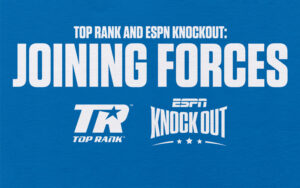 ESPN KNOCKOUT is proud to announce a four-year multimedia agreement to become the Latin American home of Top Rank, the worldwide leader in boxing promotions. The agreement encompasses 25 Spanish-speaking territories, with a potential reach of 65 million households and 260 million viewers.

“Latin America is a rich region with passionate fans connected to local and worldwide boxing for decades,” said Top Rank President Todd duBoef. “We look forward to expanding our partnership with ESPN, serving the existing fans, and cultivating new fans under their many platforms.”

Live broadcasts will feature ESPN production and analysis on SportsCenter and the ESPN KNOCKOUT studio show, as well as through ESPN.com and on social media at @ESPNKnockOut.

ESPN KNOCKOUT, the best combat sports series in Latin America, shares the passion for boxing and MMA with fans. Throughout Latin America, ESPN KNOCKOUT airs the best live boxing and the most outstanding MMA events in the universe, along with features, interviews, analysis, exclusives, previews and much more from its renowned commentator team.  Follow @ESPNKnockOut for features exclusive content and the latest news on combat athletes.

Known for creating strategic collaborations between athletes, sponsors, and television networks, Top Rank has been an architect of boxing’s global growth by staging high-profile events in landmark settings around the world, including Madison Square Garden, MGM Grand Garden Arena, Wembley Arena, Yankee Stadium, Radio City Music Hall, and AT&T Stadium. Top Rank has also been the leader within the boxing industry in creating unforgettable in-arena experiences for fans and embracing 21st century technological advancements to distribute world-class fights and shoulder programming across a variety of platforms.

Star+ is a general entertainment and sports streaming service launched in Latin America on August 31. It is be complementary to, but independent from Disney+ in this region. The service is the home for exclusive premieres of general entertainment TV series and movies from The Walt Disney Company’s content studios, including Disney Television Studios, FX, 20th Century Studios, Star Original Productions, National Geographic Original Productions and more, and the streaming service for live sports from ESPN, the most respected and renowned brand for sports fans in the region. From dramas to comedies (including all seasons of The Simpsons) and thrillers for adults, Star+ also features exclusive original programming from the Star general entertainment brand, along with a collection of regional original productions from Latin America. To learn more, visit: www.starplus.com