Puerto Colombia enjoyed a great day of boxing on Saturday during the “Fire in the Caribbean”, which included the victory by technical knockout in the sixth round of the American Abram Martinez against the Colombian Andres Garcia to win the Fedecaribe welterweight title of the World Boxing Association (WBA).

Although the rainy night did not allow the main bout between Venezuelan Yoel Finol and Mexican Luis Gerardo Castillo to take place, the rest of the evening went on normally and in an excellent setting.

Martinez showed his devastating boxing against a brave and tough opponent like Garcia, who stood toe to toe but in the end succumbed to the power of the American.

Another important fight was that of Argentine Francisco Torres, who won the WBA-Fedecaribe super welterweight belt after defeating Colombian Alexi Rivera by unanimous decision of 88-82, 87-83 and 87-83. The lanky visiting fighter took advantage in the early rounds to secure the scores and although the local fighter tightened up in the last rounds, it was not enough to turn the score around.

Meanwhile, Veronica Zuluaga and Paulina Angel, two female boxing promises in Colombia, had great performances. The former defeated Mirleidys Mercado with a spectacular knockout in the first round. Zuluaga, who fights in the bantamweight category, showed her good technique and strength to quickly dispatch her compatriot with a combination of right hook and straight left.

Angel also won his super bantamweight bout against Mileidys Hoyos by a two round knockout.

Super featherweight Kevin Piedrahíta defeated Carmelo Mármol by a one round knockout in his second professional fight. The young fighter from Colombia showed a great evolution by defeating a tough opponent known for his stamina in the ring.

Another highlight of the night was the debut of John Lenon Gutierrez, a promising Colombian boxer, who won a unanimous decision (60-54 on all three scorecards) in a dominant performance against Mexico’s Abraham Monroy.

Franklin Manzanilla knocked out Mexican Alejandro Palmero in four rounds in the featherweight division, Venezuelan lightweight debutant Andru Solarte knocked out Edgardo Garcia in the fourth round, while Argentinean Lucas Fernandez and Venezuelan Luis Guerrero drew (76-76, 76-76 and 75-75) in one of the most entertaining bouts of the night.

Finally, one of the most promising bouts of the night between the former Colombian world challenger, Rober Barrera, and the young Argentinean promise, Lucas Fernandez, ended without decision. When the rain came, the fight was at the height of the fourth round, so it could not go to the scorecards. 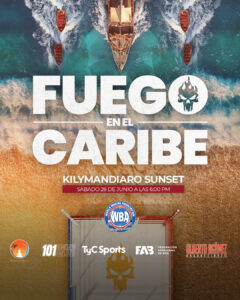