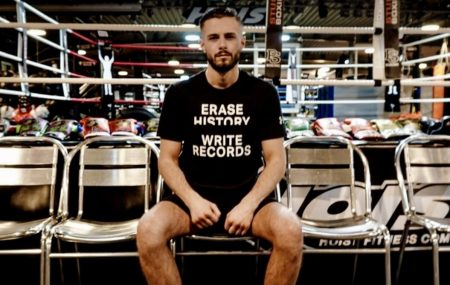 September 4, 2010. On a glorious night inside the sold-out Lanxess Arena in Cologne, Germany, then-WBA World Middleweight Champion Felix Sturm stepped inside the ring for the first time as his own promoter. In a flawless performance, Germany’s only five-time world champion outfought and outclassed hard-hitting contender Giovanni Lorenzo over twelve rounds. Sitting at ringside, among the 20.000 fans in attendance, was 13-years old Ajdin Reiz, by his own admission Sturm’s “biggest fan“ at the time. At the after show- party, Reiz asked Sturm for a photograph. He agreed. The champ and his young fan got to talking and Reiz knew instantly what he wanted to do in his life: Become a professional fighter, a world champion, just like Sturm, his role model.

July 11, 2020. After a successful stint as an amateur, Ajdin Reiz made one of his dreams a reality. In Dusseldorf, he entered the boxing ring for the first time as a professional. Only minutes later, he walked away with his first knockout win. His opponent did not make it out of the first round. The first step to follow in his idol’s footsteps had been taken. Ever since turning pro, Reiz has been training under the tutelage of none other than former world title challenger Maurice Weber, one of Sturm’s closest friends since their childhood days in Leverkusen and also the current coach of the five-time champion. He trains and fights out of the state-of-the-art Sturm Gym in Cologne, the very same place where Sturm has prepared himself for all of his fights since his battle with Lorenzo eleven years ago.

“This is absolutely insane,“ Reiz said. “If someone would have told me, back in 2010, that I would be a professional fighter, working side-by-side with Felix each and every day in his gym, I wouldn’t have had a good night’s sleep until the day it actually happened. This is a dream come true and I couldn’t envision a better environment for my career at all.“ But Sturm and his protege are not just training together, they actually became close friends over the course of the last decade. “We talk about three to four times on the phone per day,“ Reiz, now 24, said, with a laugh on his face. “I look up to him, he’s my role model and it’s such an honor to be here with him. He’s one of the greatest fighters of all time and I still have a long way to go, but with his help and with Maurice Weber as my trainer, I believe that the sky is the limit for me. I want to become world champion, that’s the ultimate goal.“

By now, Reiz is 7-0-1 with 4 knockouts as a professional, with his last win coming in early November. “He’s constantly improving,“ coach Maurice Weber said about the light middleweight prospect. “Ajdin’s a good kid, very talented, very eager to learn, to get better, hard-working each and every day. He’s still young, he’s got all the time in the world, but I believe he can and will be something special in this sport. He lives and breathes boxing.“ In his fourth pro fight, on December 19, 2020, Reiz fought and won on the undercard of Sturm’s comeback fight in Hamburg – yet another milestone in his young career. “That was just amazing, to fight on the same event Felix did,“ he said. “Easily one of the greatest moments in life. I cannot wait for it to happen again next March.“

As it was recently announced by newly founded LIB Boxpromotion, the new promoter for Felix Sturm, Reiz will be one of the leading undercard fighters for Sturm’s IBO world super middleweight title eliminator against István Szili on March 26 at the Westfalenhalle in Dortmund. That will be, by far, the biggest stage of Reiz’ career thus far. “I’m so excited about that,“ he smiled. “I always joke with Felix, telling him that he should put me in the main event because I can easily sell thousands of tickets to my friends, family and fans back in Bosnia. But all jokes aside, this is where I want to be, on the biggest stage possible, fighting in front of my fans. March 26 can’t come soon enough.“

Just like Sturm, Reiz has his roots in Bosnia – and he’s already somewhat of a star in his home country. “That photo Felix and I took back then has been published countless times in the Bosnian media,“ he explains. “Felix is a national hero in Bosnia, so whenever I fight, the photo gets published again and I receive a lot of media attention. It’s crazy, actually, but I am so proud of my heritage and of all the people back in Bosnia who are rooting for me to archive great things in boxing. It’s amazing to feel so much love and support this early in my career. I cannot wait to make all of my fans proud by winning a world title one day.“ With yet another of his trademark smiles, he added: ”And then Felix can come ask me to take a photo with him and my title belt!“