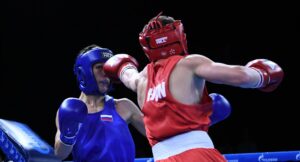 The EUBC Junior European Boxing Championships finished with the 13 male finals in Tbilisi, Georgia, it was the next exciting competition in the busy boxing calendar. Russia’s Malik Sugaipov, Georgia’s Demur Kajaia, Hungary’s Levente Olah and Ukraine’s Renat Chubrevychev amazed on the day of the finals.

AIBA President Mr. Umar Kremlev followed all of the finals and led the closing ceremony of the tournament. AIBA President congratulated the Head of the Georgian Boxing Federation Mr. Davit Tsiklauri and his managing team to host the competition at such a high level.

AIBA Secretary General Mr. István Kovács presented the money prize certificates for the junior talents besides their medals. The gold medallists earned $4,000 USD, the runner-ups $2,000 while the bronze medallists $1,000 US dollars in Tbilisi.

Fourteen nations claimed at least one medal in the men’s part of the EUBC Junior European Boxing Championships. The male titles have been shared among Russia, Ukraine, Georgia and Hungary.

Georgia’s first male finalist Gor Ayvazyan had a seriously tough road to the finals but he eliminated the favorites. The Georgian pinweight (46kg) boxer had to meet in the final bout with Ukraine’s Renat Chubrevychev and he felt the support of the local fans. The Ukrainian moved more on feet in the first round and he was able to lead in each scorecard after two minutes of the fight. Ayvazyan showed better performance in the second round and he caught Ukrainian southpaw with a few jabs. However, Chubrevychev had great counter-shots from a longer distance. Chubrevychev stopped the Georgian attacks and despite of Ayvazyan’s efforts in the last round, the Ukrainian won the first gold medal.

“I arrived to the European Junior Boxing Championships to get the gold medal and I did it. It was a difficult contest, my local rival was strong but I used my smart tactic to beat him. The first and second rounds were the best for me today,” said Chubrevychev after his final bout.

Malik Sugaipov of Russia turned back his final with energetic boxing

Georgia’s Oruj Akhmedovi had a tough but successful battle against Armenia’s Samvel Grigoryan and advanced to the final of the light flyweight (48kg) where he met with Russia’s Malik Sugaipov. The taller Russian surprised Akhmedovi with his effectiveness in the first round. The bout delivered a sensational battle between the two southpaw boxers. Sugaipov moved ahead more in the second round in spite of his height advantage and he looked confident in those two minutes. Akhmedovi had successful counter-punches which delighted the local fans but Sugaipov produced a fantastic finish and won the difficult final.

“I believe the second and third rounds were the best for me today and I could win the final with them. I am extremely happy with this gold medal which is my first big title in my career,” commented his success Russia’s Malik Sugaipov.

Azerbaijan’s Mahammadali Gasimzada was named as one of the main favorites for the title in the bantamweight (54kg) following his international tournament titles. The 16-year-old was the only one from Azerbaijan who advanced to the finals at the EUBC Junior European Boxing Championships. The Azeri was smaller than Russia’s Bogdan Prima in their final and his main mission was to reduce the fighting distance. Gasimzada had to work from an uncomfortable distance in the first round and landed not enough punches to take the opening two minutes. Prima had the technical skills to use his best distance and won the next final between southpaw boxers.

“I wanted this gold medal so much and was very focused. I had the strategy which we discussed with the coaches and that worked well in the final,” said Prima after he has earned the fifth title of the championships.

Hungary’s Levente Olah defeated all of his rivals before the final gong, he shocked all of the boxers this year with his aggressive style. The Hungarian featherweight (57kg) boxer dominated all of his three contests in Tbilisi and he tried to impress once again in the first round against Russia’s Ivan Chindykov. Olah caught the quick Russian with a big punch in the opening 30 seconds and controlled their exchanges. Chindykov tried to move a lot on his feet to avoid the powerful hooks of the Hungarian but he was under big pressure in the second round. Olah had a strong advantage after two rounds but he was never stopped attacking and won one of the best contests of the final day.

“I felt very strong today and I knew that I will be better than my Russian rival. I believe I was better in all of the three rounds and deserved the gold medal. I came for the gold medal in Tbilisi and I made it,” summarized his success Hungary’s big puncher Levente Olah.

Georgia’s Demur Kajaia had gold medal expectations before the start of the championships in Tbilisi. The 16-year-old Georgian was patiently waiting for the best angles in the final against Ukraine’s Bohdan Cheldyk. The taller Georgian used well his height in the first round and he had the advantage in four scorecards. Kajaia’s strategy worked better also in the second and third rounds. The Georgian delighted the local fans with his gold medal and proved that he is Europe’s best junior boxer in the lightweight (60kg).

“I have been training since 2014 and I reached the finals at the 2018 European Schoolboys Boxing Championships. I became European Schoolboys Champion two years ago and this is my second continental gold medal. I believe that with the support of my club coach, Edik Todua, the national coaches as Beka Lobjanidze, Nikoloz Izoria and Zaal Kvachatadze, and the management of the Georgian Boxing Federation, I will win many titles in the future,” said Kajaia after his fabulous final contest.

Russia’s Rasul Gadzhiev was confident at the light heavyweight final

Romania’s male No.1 Angelo Teodorescu dominated his semi-final against Croatia’s Mateo Pejic and advanced to the final of the light heavyweight (80kg). Teodorescu met for the gold with Russia’s Rasul Gadzhiev and tried to keep his perfect shape in 2021. The Russian landed single jabs in the first round while Teodorescu could not repeat his semi-final performance. The Romanian was less active in movements and did not land enough punches, therefore, Gadzhiev had an advantage after two rounds. Teodorescu has done riskier attacks in the third round but Gadzhiev was too strong for him this time.