Everything is Ready For Alberto Palmetta’s First Defense in Argentina 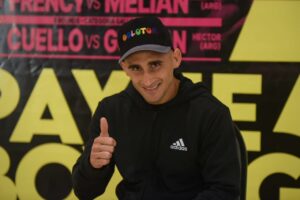 In the Howard Jhonson Hotel in Buenos Aires, Argentina, took place the weigh-in ceremony of the World Boxing Association Welterweight International Champion Alberto “Beto” Palmetta and the Aztec Alan Herrera who will clash on Saturday, March 27, under the promotion of Pyne Boxing.

In strict compliance of the protocols set forth by governmental regulations to protect people, the international event to be held at the Microestadio Lanús in the province of Buenos Aires, will not be attended by the public, nor was there any public present during the weigh-in ceremony, where only a few members of the specialized press could be present.

Each fighter was swabbed without any inconvenience, together with the respective medical controls, and then they were allowed to declare before the scales.

Mirco Cuello was the first to step on the scale, weighing 53.350 kg, while his opponent Héctor Rolando Gusman weighed 53.500 kg.

The next to weigh in were the featherweights, where Olympian Alberto Melian weighed 55.650 kg and his opponent Frencys of the Payne Boxing team weighed 56.250, who will fight for 10 rounds.

Then it was the turn of the champion who stopped the scales at 64.350 kg. and the Mexican challenger Alan Herrera weighed 64.200 kg.

“The plan is focused trapping to the mouse. Make my opponent attack me so I can counterpunch. I feel very good and happy to be defending in my country with my family,” said Beto to some of the press present.

“I’m very excited to have a title shot again to keep the flame burning. I fought almost all my fights at 135 pounds and only the last ones were at 147, but I made an effort to make 142 with the goal of returning to 135,” Herrera said with great enthusiasm.