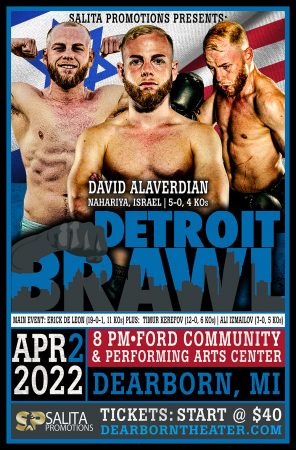 An eight-time Israeli national champion and a bronze medalist at the 2012 European championships, Alaverdian was brought to the US by his manager, Dr. Daniel Carpenter and promoter, Stephen Reid. The Armenian/Jewish slugger now lives in Las Vegas and trains with the legendary Floyd Mayweather Sr.

After shortages of willing American opponents led him to take his first five fights in Mexico the 28-year-old Alaverdian says he’s happy to be appearing on Salita Promotions’ next event. A successful former fighter turned promoter, Dmitriy Salita was appointed WBC Representative to Israel last year, working alongside the Middle East Boxing Council to develop boxing in the region. He and Alaverdian met through a mutual association with former Attorney General of Israel, Yehuda Weinstein.

“I’m not one of these guys who say I’m going to be a world champion or beat this guy or that guy. I don’t know if that’ll happen. I don’t know the future. If it doesn’t come true, then I didn’t hold true to my word. I’m going to give it my best in boxing, while trying my best to always be a good human being. I can say that with certainty.”

Alaverdian says he was forced into boxing by his father, who was worried his small stature would lead to bullying if he wasn’t able to defend himself. After going on again/off again for a few years, Alaverdian got serious about the sport a few years ago and has gone on a tear, staying undefeated in the ring while becoming a social-media influencer on the strength of his viral training videos with Mayweather.

“It’s pretty great,” recollects Alaverdian of his relationship with Floyd Mayweather Sr., the former fighter, elite trainer and father of the all-time-great Floyd Mayweather Jr. “He’s getting older now but I like to mess around and a lot and laugh and he’s pretty much the same. We have a lot of fun when we train and I’ve learned a lot about defense, obviously, but also counterpunching and moving.”

Alaverdian is also becoming known as a body-punching specialist, with sparring videos online of him delivering one crippling liver shot after another, ala “Irish” Micky Ward.

“In the amateurs, my coach used to emphasize body shots and I noticed they really worked for me. I know how to generate a lot of power. It just comes naturally, so now the liver shot is my best shot. My opponents know it’s my best shot, but they can’t get away from it.”

“I am excited about the world class, international talent we have on our Detroit Brawl events,” said Dmitriy Salita. “On April 2, we are going to have one of Israel’s best put it all on the line against a more experienced Jeno Tonte. Local boxing fans will get to see some of the best prospects, contenders and future world champions all at different stages of their careers in America’s greatest comeback city, Detroit, Michigan.”

Kerefov will take on well-respected trialhorse Cleotis “Mookie” Pendarvis (21-9-2, 9 KOs) in an eight-round showdown. The murderous-punching Izmailov’s, as well as Pagan’s opponents are yet to be announced.