Cuba and Mexico “Boxing is One” in Aguascalientes photo gallery 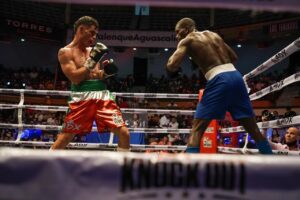 The World Boxing Association’s (WBA) flag campaign “Boxing is One” resounded this Friday, June 11th, in Aguascalientes, Mexico, thanks to the boxing cards between fighters of the Cuban Olympic Team, for the first time in history, and a team of professionals representing Mexico. The event was organized by the Cuban Boxing Federation, through its president Alberto Puig, and Golden Ring promotions company, in charge of Mexican Gerardo Saldivar.

The card, made up of eight 6-round bouts, and each one of them without announcement of the final result because they were exhibition bouts, was starred by Cuban Andy Cruz, former AIBA World Champion and former Pan American Champion, and former Mexican World Champion Miguel “Títere” Vázquez, who offered a great show in which Cruz even kissed the canvas on one occasion in a very even bout.

Cuba’s former Olympic Champion, Roniel Iglesias, and Mexico’s Jose Miguel Borrego did the same in the Welterweight division, as they battled hard in an also even bout of different styles. The Palenque Coliseum also vibrated with the fight between the Mexican Rolando Soto and Dainier Peró of Cuba, in the Heavyweight division; in the Cruiserweight division, the local Julian Fernández had to face the elusive Julio César La Cruz of Cuba, who gave a great defensive exhibition.

The Cubans Arlen Lopez and Yoel Feliciano, who faced the Mexican Riojas and the Venezuelan Alfonso Florez in two good fights in light Heavyweight and Super Middleweight, respectively, did not want to be left behind. Local Emmanuel Dominguez also showed his skills against Yosvani Veitía of Cuba.

However, this Friday event demonstrated that there is only Boxing is One, as stated by the WBA in 2018 through its president Gilberto Jesus Mendoza, and that if things are done right the athletes and the public are the biggest winners.