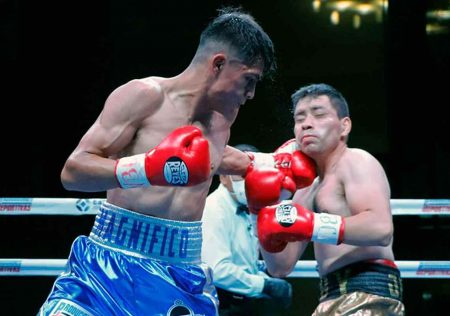 The young García tried several strategies to beat the experienced Juárez, who at the beginning of the fight went on the attack and hit him early, from short and medium distances.

The scores showed an even fight in the early rounds between the equally matched opponents. García threw his cross while Juárez bet on uppercuts. That gave García good results, but not enough for a knockout.

The fight continued, with Juárez in front and García waiting for the right moment to counterattack, forcing more blows in the center of the ring, with the scores after the middle rounds all in favor of “El Magnifico,” 77-75, 77-75 and 80-72.

In the last two rounds, Juárez tried to salvage the fight by going for the knockout, but García changed his strategy and kept his distance. He threw punches sporadically, knowing that the score would bring him victory.

Jesús “Chiquito” Haro from the United States defeated Oscar “El Guapo” Bermúdez from Mexico City by unanimous decision, 99-91, 98-92 and 98-92, in what was the semifinal fight of the night at 10-rounds at strawweight.

Elizabeth “Polvorita” Cruz from Mexico City was unable to beat Brenda “La Hormiguita” Balderas from Mexico City, who won a split decision victory 76-75, 75-77, and 75-78, in an eight-round strawweight fight.

Michael “El Buitre” Martínez from the State of Mexico was unable to beat Emiliano Rojo from Guadalajara who prevailed by unanimous decision, 37-40, 36-40, and 36-40, in four-rounds at super welterweight.

Kevin Pérez from the State of Mexico defeated Jacobo Reyes of San Luis Potosí by unanimous decision, 39-37, 39-37, and 39-38, in a four-round clash at lightweight.