With a new year comes fireworks, and CES Boxing is ready to light up the sky with an epic showcase next month at one of the world’s premier entertainment venues.

Tickets are available online at CESFights.com, MoheganSun.com, or at the Mohegan Sun Arena box office.

Fresh off his knockout win over Dennis Ventura four months ago at Mohegan, Cusumano (21-4, 19 KOs) returns to face the 6-foot-4 Bernath (10-1, 8 KOs), a two-time silver medalist at the European Union Amateur Boxing Championships who was born in Budapest and now fights out of Miami.

The 10-round Cusumano-Bernath showdown is one of 11 fights at Winter Brawl, which also features the long-awaited return of Stamford, CT, light middleweight Chordale Booker (17-1, 7 KOs) in an eight-round showcase against 37-fight veteran Angel Hernandez (17-17-3, 11 KOs) plus a highly-anticipated six-round interstate battle between Michael Valentin (7-1-1, 1 KO) of Providence, RI and the undefeated Kevin Walsh (6-0, 4 KOs) of Brockton, MA.

Returning from a 13-month layoff, Worcester, MA, featherweight Irvin Gonzalez (15-3, 11 KOs) steps back into the ring in an eight-round bout against the dangerous Headley Scott (18-1, 12 KOs) of Jonesboro, GA, and super featherweight Alejandro Paulino (11-0, 9 KOs), one of the region’s fastest-rising prospects, puts his undefeated record on the line in a six-round bout against Ryizeemmion Ford (8-3, 6 KOs). With nothing to lose and everything to gain, Texas’ Miranda Reyes earned the biggest win of her young career.

Despite being 26 years younger than Clampitt (23-6-2) with only six pro fights under her belt entering the weekend, Reyes was the aggressor Friday, rebounding from her first career loss in February with a 79-73, 78-74, 78-74 win.

Clampitt, who came out of retirement last summer, lost for the first time since 2010, a defeat at the hands of Holly Holm in Albuquerque. The Saskatchewan native and Warwick, RI, resident entered Friday four months removed from a win over regional rival Kim Wabik in February, but the young, hungry Reyes presented a much different challenge.

While Wabik was more of a defensive fighter looking for an opportunity to counterpunch, Reyes came out swinging from the opening bell, applying pressure to Clampitt and landed the more damaging punches between the two. Clampitt found her footing in the middle rounds, but her output simply could not match Reyes; the 20-year-old prospect continued to land the cleaner blows on a consistent basis, earning the win decisively on all three scorecards.

In the co-main event, hard-hitting Sicilian heavyweight Juiseppe Cusumano (20-4, 18 KOs) earned his first win since November of 2020 and his milestone 20th victory, stopping Brazilian veteran Irineu Beato Costa Junior (19-12) at the 1:20 mark of the opening round of their scheduled eight-round bout.

Friday’s win was especially important for Cusumano, who suffered a tough loss to Daniel Dubois in August, prompting him to move his entire training camp to New England, finding a new home at Champs Boxing & Fitness in Danbury, CT. A leaner, more determined Cusumano made quick of Costa, flattening his opponent with his trademark overhand right, his 10th win under the guidance of CES since signing with the promotion in 2017; Cusumano has now won as many fights in five years with CES as he did in the first seven years of his pro career.

Making his Ballys debut, Weymouth, MA, super middleweight Francis Hogan (11-0) faced a tall order in a six-round showdown against Brazilian Rodrigo Lopes Rodrigues (8-3), but cruised to 60-54 unanimous decision win, going the distance for the first time in his pro career.

The 6-foot-2 southpaw, fighting for the first time signing a long-term promotional agreement with CES, Hogan stayed busy from the first to final bell, out-working the hard-nosed Rodrigues, who continued to press forward despite the ferocity of Hogan’s jab and looping left hands. Rodrigues had his moments, but Hogan weathered every storm to earn his 11th victory in just under two-and-a-half years since turning pro.

The knockout of the night belonged to rising super featherweight prospect Alejandro Paulino (10-0, 9 KOs), who entered the ring at 130 pounds – the lowest weight of his career – and looked as dangerous as ever, stopping Brazilian challenger Aldimar Silva (22-20) at 54 seconds of the opening round of their scheduled six-round bout.

Paulino went the distance in his previous fight, surviving a knockdown to beat Andrew Rodgers, but wasted no time disposing of Silva, beating fellow Big Six Boxing Academy stablemate James Maner by one second for the fastest knockout of the night. Maner, the 6-foot-3 southpaw middleweight from Providence, RI, flatted Dan Bunyan (0-2) of New York in 55 seconds in the event’s opening bout.

Taking the fight on just 24 hours’ notice, Boston, MA, lightweight Jonathan de Pina (8-1) outworked Argentinian Mario Lozano (18-7-1) via unanimous decision 60-54, 60-54, 59-55. Lozano was originally scheduled to face Kevin Walsh, who was forced to withdraw due to injury, and de Pina was originally scheduled to fight Friday in Mexico, but his felt fell through earlier in the week. 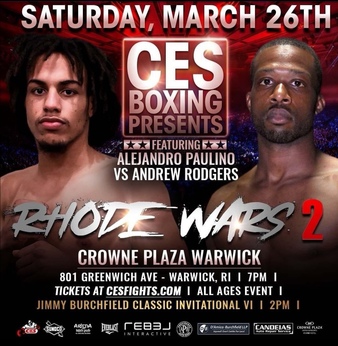 Limited tickets remain and are available at www.boxingnh.com. The event will stream live on WWW.COMBATSPORTSNOW.COM for 19.99.

Boston Boxing Promotions was founded in 2013 and is dedicated to the resurgence of professional boxing at the regional level, particularly in the New England area. Since that time, it has presented professional boxing events in places like Boston, Cape Cod, New Bedford and New Hampshire. Boston Boxing Promotions was the first independent boxing promoter on the east coast to hold an event during the pandemic. The event led to a popular series of empty venue shows broadcast live and for free on YouTube watched by thousands of fans around the world. Boston Boxing Promotions returned to live audiences with The Great American Boxing Bash this past summer which featured 3 consecutive sold out weekends at the The Castleton in Windham, New Hampshire.