Kent Fight Night is back on March 12 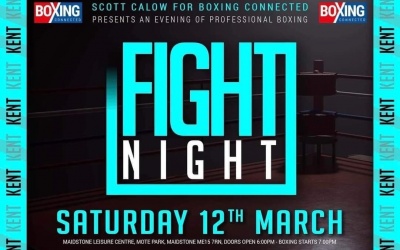 Boxing Connected return to the popular Mote Park venue for a 14th time and just four months on from their previous show at the same venue last November.

Orpington’s exciting featherweight Martin Hillman (15-6, 2KOs) was last in action on the November event when he defeated former Ghanaian super-bantamweight champion Raymond Commey on points to notch up his 15th win in his 21st contest.

The ‘Pie and Mash Kid’ wants to challenge for a Southern Area title again in 2022. His last attempt ended with him being denied by a single point from the away corner against Duane Winters in Bristol in 2018.

The 26-year-old southpaw returns in a six-rounder with plans to fight for a title later in the year. The rest of the card includes Rainham’s Brooklyn Tilley (2-0), who drops down to lightweight from welterweight for his third pro contest against an opponent yet to be named.

Lanky featherweight Robert Caswell (1-0), trained by Adam Martin in London, won his pro debut against Luke Fash with a dominant performance last November, and now looks to return to the same setting for fight number two.

Tyrone King (1-0), a 22-year-old middleweight from Sittingbourne, defeated Langold’s Luke Middleton in his pro bow, roared on by the largest support in the arena that November night. The 160- pounder is all set for another four-rounder with his opponent yet to be confirmed.

If you like what we do, please consider a one-off donation to help us grow and to bring you even more boxing news & results from around the world (you can even make a recurring payment). All safe and via PayPal…just click the PayPal image below: