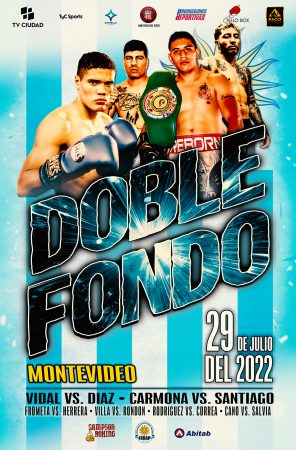 For his second fight this year, the big-punching 26-year-old Vidal, who now lives in Los Angeles, is training in Uruguay. He was last seen in April of this year, making quick work of transplanted Argentinean Osmar Gustavo Dominguez Chamorro (TKO 2) in his first defense of his WBC Latino belt he won in 2019. A TV favorite in the United States, Vidal is known for his tremendous punching power in both hands.

Díaz, 25, a native of Rafaela, Santa Fe, comes to this fight after knocking out Nicolás Brito in three rounds last July. Diaz has faced several of his best domestic competition, such as Emiliano Pucheta, Jairo Rayman (whom he defeated), Wilson Sánchez, Gerardo Vergara and Alejandro Silva, among others.

In his professional career, 31-year-old Carmona has beaten quality foes such as Jesús Iribe and Belmar Preciado, and is also one of the few fighters to go the distance against the Japanese “Monster” Naoya Inoue, against whom he disputed the WBO super flyweight world title in 2016. He also fell by decision against Carlos Cuadras and fought Englishman Khalid Yafai for the WBA super flyweight title in May 2018.

Accustomed to boxing’s ups and downs, Mexican bantamweight contender Alejandro “Peque” Santiago rebounded from his nationally televised and highly controversial majority-decision loss to Gary Antonio Russell in November 2021 by taking a 10-round unanimous decision over countryman Juan Ramirez Marquez. The hard-luck Santiago has been the “victim” of several controversial draws against top fighters in high-profile fights, including one particularly dubious draw against IBF Super Flyweight Champion Jerwin Ancajas in 2018.