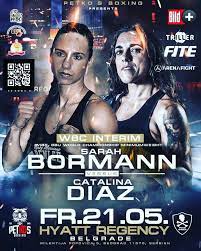 Mendy, now 19-17-3 (2), has taken on all comers in recent years, and also defeated good fighters such as former WBA world champion Dmitry Chudinov and current IBO titlist Oscar Ahlin. For Al Bewani, 8-1 (6), its back to the drawing-board.

The show was promoted by former Heavyweight contender Alexander Petkovic and streamed live by bild.de.