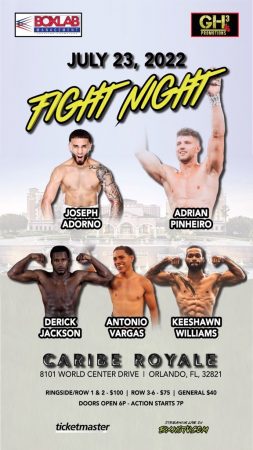 Headlining is lightweight Joseph Adorno of Allentown, PA in a six round contest. Adorno is 15-1-2 with 13 knockouts and scored a highlight reel one-punch knockout of Juan Santiago on May 21. Adorno’s opponent will be announced shortly.

Junior welterweight contender Shinard Bunch will face an opponent to be determined in a six rounder. Hailing from Trenton, NJ, Bunch is an outstanding 19-1-1 with 16 KO’s. On May 13, Bunch stopped Marklin Bailey in 47 seconds.

2016 US Olympian Antonio Vargas returns to the ring for the first time in 2 ½ years and faces an opponent TBD in a six round bantamweight tilt. Vargas, 12-1 (5 KO’s), hails from nearby Kissimmee, FL.

Cruiserweight knockout artist Adrian “Pretty Boy” Pinheiro looks to run his record to 8-0 with 8 KO’s when he meets an opponent to be announced in a six round contest. Born in Poland and residing in Orlando, Pinheiro’s stopped six of his seven foes in two rounds or less.

Steven Galeano of Orlando, FL by way of Bronx, NY is appearing in a six round junior welterweight contest. Galeno, 11-0 (8 KO’s), scored a fifth round stoppage of previously unbeaten Yeifer Valencia on June 4.

Orlando’s Derrick “Diesel” Jackson risks his 8-0 record vs an opponent to be announced in a six round junior middleweight contest. Jackson, now 20, had his first amateur fight at age 5 and captured medals at the Junior Olympics, Eastern Regionals, and US National Championships.

“We are proud to be putting on the Orlando Fight Night card at the Caribe Royale Resort,” said Vito Mielnicki of GH3 Promotions. “In partnership with Boxlab Promotions, we’re bringing this event to Orlando and featuring not only top contenders such as Joseph Adorno and Shinard Bunch, but some of the best fighters in Central Florida in Adrian Pinheiro, Antonio Vargas, Derrick Jackson and many others. This card has a lot of talented fighters and the fans are in for a real treat.”

Doors open at 6 pm and the first fight is scheduled for 7.

A four diamond resort, the Caribe Royale is a 1,388 room resort that provides a luxurious and relaxing experience for guests of all ages. Amenities include a spa, five restaurants, kid’s splashpad and playground, a two-story fitness center and a large outdoor pool featuring a 75 foot waterslide. Fully re-imagined and renovated with over $127m in improvements and expansion Caribe Royale is the premier all suite hotel in Orlando.