Hiroto Kyoguchi retained his WBA Super and Ring Magazine World Light-Flyweight titles by stoppage over Esteban Bermudez in a bloody battle at the Domo Alcalde in Guadalajara, Mexico, live on DAZN.

Kyoguchi (16-0 11 KOs) was putting his belts on the line for the fourth time against the WBA regular champion Bermudez (14-4-2 10 KOs), and the pair put on an all-action blood and guts battle that would have found space in a phone box.

The Japanese set a ferocious pace, constantly finding a home for his uppercut, and a cut to the forehead from a head clash only made a tough opening all the harder for the Mexican. Kyoguchi had a point deducted in the sixth for use of the head and in the seventh for hitting behind the head as Bermudez was heading to the canvas from a barrage of punches.

The end was around the corner for the homeland favorite, and despite the roars from his fellow countryman, Kyoguchi unloaded one more barrage of punches that Bermudez could not withstand, and the travelling champion landed the 11th KO win of his career in the eighth round, and now wants unification showdowns.

“I have always wanted to fight in Mexico with the great fans here and I am so glad that I did,” said Kyoguchi. “It’s a great win and I am ready for the next step. There are many other champions in the division, and I want to fight them.

“The Mexican fans love boxing – it was a tough atmosphere, but I loved it and I want to thank them for coming tonight and for their support, and for the fans in Japan too.

“I thanked him for the great fight that we put on and was sorry for the points deductions. I thought that they were a bit strict, but they gave him damage, so I was sorry for that.”

The main event had quite the act to follow, as Rocky Hernandez (32-1 29 KOs) pulled off a stunning first round KO win to rip the WBC International Silver Super-Featherweight championship from Jorge Castaneda (15-2 11 KOs).

The chief support bout of the evening promised to deliver fireworks and Hernandez came roaring out of the traps with heavy artillery, and the fight was all but over when bookended left hooks from a ferocious early barrage floored a stunned Castaneda.

The Texan rose to his feet, but Hernandez went in for the kill and got it – putting the champion away and is now in a great position to land big fights later in the year.

“I hope to have a World title opportunity very soon,” said Hernandez. “I knew that this was going to be a great fight, but I was always confident I was going to win well, and I showed that.”

Mayerlin Rivas (17-4-2 11 KOs) retained her WBA World Super-Bantamweight title with a powerful display over Karina Fernandez (17-7-1 3 KOs), ending a near two-and-a-half-year absence from the ring in style with a fourth round stoppage.

A cuffing right hand put Fernandez down in the opening stanza, and blood was pouring from Fernandez’s nose which looked to have been broken in the second round.

The Mexican would be cleared on one inspection by the doctor, the fight was waved off before the fourth round began with the blood refusing to stop – and under the watchful eye of trainer Rigoberto Álvarez, the Venezuelan showed her power has not suffered through her time out of the ring.

“I took this opportunity with both hands and it’s a big thank you to Eddie Hearn and Matchroom,” said Rivas. “I told Eddie I would not let him down and here we are.

“The Alvarez bloodline is strong, and he’s brought it out of me and it’s here to stay, I am only going to get better.”

Pacheco hurt Ortega in the second but going in for the kill was hit on the button with an overhand right that stunned him. Pacheco shook that off and landed a right uppercut to the body to put Ortega down again.

The tough Mexican continued to keep Pacheco honest, but Pacheco was getting the measure of his man in the third round and a fearsome barrage at the end of the fourth session would see Ortega retire on his stool and see Pacheco become the first man to stop him and record a 12th win inside the distance in his 15 fights.

“He was tough,” said Pacheco. “I hit him with a bunch of stuff, but he kept coming and I am happy I got him out of there.

“Being in the Benavidez camp, they push me every day, the work ethic is crazy and it’s boosting my confidence so much.

“I consider myself to be a man now. I think the big fights are coming and I can’t wait.”

Debutant Jesus Martinez (1-0) was explosive from the very first bell of his pro journey, and heavy right hands put Daniel Nunez Gomez (1-2) down inside the opening 90 seconds. The Texan teen talent didn’t land the first round KO, and Gomez’s resistance was stiff enough under three more rounds of fire to see ‘Panterita’ go the four-round distance on his pro bow and taking every round.

On the Before the Bell section of the card in sweltering heat, Anthony Herrera (2-0-1 2 KOs) was held to a split draw in his third pro fight against Kennyn Valenzuela (5-2-1 4 KOs) and Aaron Aponte (6-0 2 KOs) landed a split decision win in the show opener against the game and awkward Mexican Leo Leon Martinez (2-2 2 KOs).

Angel Garcia (7-0-2 6 KOs) recorded a sixth straight win inside the distance, with his impressive work forcing the corner of Alexis Molina (8-1-1 5 KOs) to pull their man out before the sixth and final round, after taking the fight at just two days’ notice. Jorge Ignacio Villalobos (11-1-3 6 KOs) secured a unanimous decision over Fabian Gonzalez (9-4 2 KOs) in an all-Guadalajara battle at Bantamweight.

Live on Before the Bell from 4pm CDT

Live on DAZN from 7pm CDT 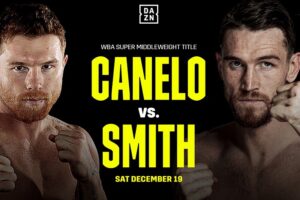 Fight Notes: Castro was making his professional boxing debut. Time of the stoppage was 1:59 of the 3rd round for a Castro knockout win.

Castro: “I was happy with my performance but lots to improve and get back to the gym and start working.  Keep working hard and repetition”

Fight Notes: Time of the stoppage was 1:35 of round 7 with the bout made at heavyweight.

Fight Notes: Time of the stoppage was 1:29 of the 1st round with the bout made at middleweight.

Fight Notes: Time of the stoppage was 1:54 of the 3rd round with the bout made at welterweight.

Fight Notes: The scores were 39-37 and 37-37 twice for a majority draw. Bout made at super featherweight.