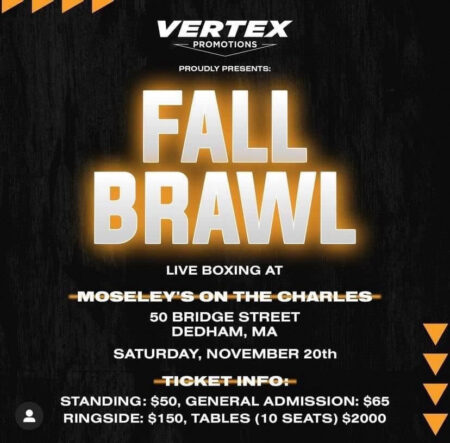 “We’re excited to be promoting our fourth show we’ve promoted since our inaugural event this past September 25th,” Vertex promoter Dave Clark said. “We’ve found a home at Moseley’s On the Charles, which provides intimate setting just outside of Boston. Our goal remains to provide local boxers with opportunities to stay active and fight in front of their family and friends. We get better at promoting with each show.”

Sosa will fight Alfonso Olvera (12-6-3, 4 KOs), fighting out of Tucson (AZ) by way of Mexico, in the 8-round main event. Sosa, who hadn’t fought in 28 months, returned to the ring with a fury, albeit showing signs of rust. His hands were quick, as usual, and he was well poised as on the last Vertex show, September 25th at the same venue. His veteran Mexican opponent, Danny “Venado” Flores (15-25-1, 8 KOs), continually but unsuccessfully tried to lure Sosa into traps. Sosa was the hunter, stalking a game Flores, who often stayed in the corners or on the ropes baiting Sosa to mix it up. Sosa “pitched a shutout,” winning eight rounds on all three judges’ scorecards.

Promising super welterweight prospect Francis “Frank The Tank” Hogan (8-0, 8 KOs) will put his perfect pro record on the line in a 6-round bout against an opponent to bet determined. Hogan, of Weymouth, MA, is the reigning New Hampshire super welterweight champion, as well as a 2019 New England Golden Gloves gold medalist.

Unbeaten Providence middleweight Anthony Concepcion (8-0-1, 6 KOs), a member of World middleweight champion Demetrius “Boo Boo” Andrade, will be in action against TBA in a 6-rounder.