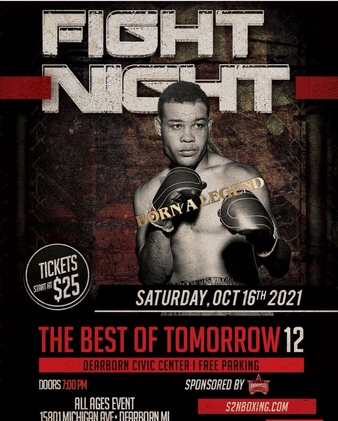 Making his US ring debut at the Performance Arts Center in Dearborn, Michigan, Izmailov (now 6-0, 4 KOs), from Malgobek, Russia, turned the heat up early in round two with a left that sent Ballard’s mouthpiece flying several rows into the ringside seats.

Shortly thereafter, with the normally durable Ballard (10-4, 3 KOs) along the ropes taking a two-fisted pounding, referee Pat Schmidt had seen enough. The official end came at 1:21.

“Ali ranks up near the top in punching power, he truly packs a tremendous punch with either hand,” said new trainer John David Jackson. “It was our first boxing match together and even with the language barrier we communicated very well. He used his jab really well and his body shots were really nice.”

Jackson says one more fight working together at his Action Jackson Boxing Academy in Fort Lauderdale and Izmailov will be ready for anyone in the division.

“He’s definitely a boxer to watch out for,” continued Jackson. “He has fast reflexes, but I feel as if we need one more camp together before he is truly tested in a very big bout. We need to work on throwing more body punches and moving his head more when he stands in front of his opponent.”

Promoter Dmitriy Salita says using Ballard as a measuring stick and looking at the relative ease with which his fighter dispatched him, the 28-year-old former amateur standout Izmailov has a bright future.

“Ali Izmailov is the hardest hitter in a division ruled by some very heavy-handed guys,” said Salita. “The loud thudding of his punches had the crowd gasping whenever he landed. Ballard is a test for anyone and Ali just walked through him. Fighters can’t take the kind of power he brings into the ring.” Jackson, who has spent the last three weeks sizing up his new protegee, says Izmailov is a diamond in the rough waiting for polish.

“The sky is the limit for him with his punching power,” said Jackson of Izmailov. “He’s a tremendous puncher, but he’s also got natural boxing skills. As a fighter, I don’t think he realizes his potential. I’m getting him to move his head more and throw more combinations, instead of one power punch at a time. Nothing against his old trainers, but once he learns to throw three or four shots to set them up and camouflage the hard ones, he will be unstoppable.”

Jackson says the 32-year-old Ballard will be a good test for Izmailov and his newfound skills, but shouldn’t be able to derail any of their plans.

“Ballard is good, but Ali just has to pressure him and go to the body to break him down. Once his opponents feel his power, they all have a change of heart. Once Ali hits him with some good shots, it’ll be a matter of time.”

“Ali has amazing potential to be a star and John David is the perfect trainer to bring that out of him,” said Izmailov’s promoter, Dmitriy Salita. “I think you’ll see the improvements immediately under his expert tutelage. Ali was already the best prospect in the light heavyweight division.”

Tickets for “Best of Tomorrow 12” are priced at $25 – $1,000 and can be purchased online through Eventbrite.com. On fight night, the action starts at 7:00 pm. The Ford Community & Performing Arts Center is located at 15801 Michigan Avenue in Dearborn, MI. The event is sponsored by One Punch Knockout Gym, Topbreed Management, Pharaoh Website Hosting & Restaurant Online Ordering Service, MJ Diamonds, Family Tied Entertainment.