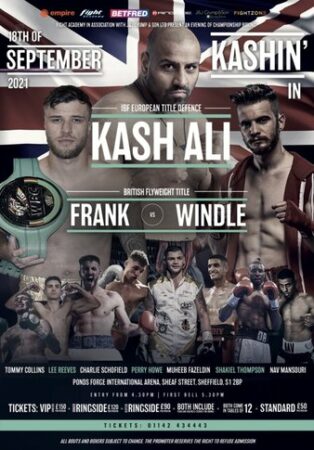 Fight Notes: After a cagey start from Gorst, Gorst came into the fight in the 5th round when up to this point, Ali had dictated. In the 6th, Ali landed three telling rights to finish the round strongly as was the case in the 7th. in-between the 7th and the 8th round, Gorst’s corner signalled the retirement of their fighter, who seemingly picked up a injury to the jaw.

With the retirement, Ali won the bout via a stoppage win via corner retirement.

Fight Notes: In a typical situation where the bigger good fighter beat the smaller good fighter, Tommy Frank won the British Flyweight Title by beating Matt Windle on points over the 12 round distance. The bout had one knockdown, scored by Frank in the 2nd round.

Fight Notes: The bout went the 8 round distance with Giles winning every round. The referee’s scorecard read 80-72 for a Giles points victory.

Fight Notes: Albrecht was down in the 1st round. He was immediately knocked down again with referee Howard Foster waving off the bout.

Fight Notes: The bout went the 6 round distance with Reeves winning every round on points. The Referee’s score card read 60-54.