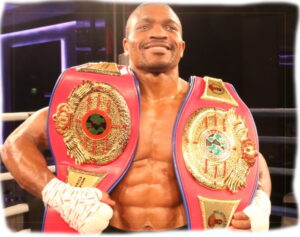 A 2013 law graduate from Cameroon but fighting out of Dubai, he won the UBO title on away soil in Ghana, stopping local man Stephen Abbey in March of 2020.

In between, he had two stay-busy fights, and that run, winning the UBO title, staying active with two more victories before successfully defending the title, earned him the 2020 UBO Accomplishment of the Year Award.

The following is an extensive interview to shed some more light on who is Rolly Lambert Fogoum.

Q: Tell us about your childhood, and how you got into boxing?

A: On an African standard, my childhood was normal until the circumstances of life scattered my family and parted me from my parents and siblings at a very young age. From there on I became a sort of nomad or gypsy, going from city to city. Wandering and sleeping in the street here and there.

Nothing was easy, and I had to survive during those recurrent street fights and get the respect that is needed in the jungle of the ghetto. Boxing was the sport that those tough guys practiced in order to bring physical terror in the neighbourhood.

Mike Tyson also influenced me with his meanness in and out of the ring. So I joined a boxing gym where I had my first amateur fight within 2 weeks. I hammered that brother with two years of experience so foolishly that he quit in the second round.

My coach predicted that one day I will be a champion, which by that grace of God I’m now and still looking forward to more belts.

Q: How was boxing for you in Cameroon?

A: Boxing in Cameroon was not, and is not, easy at all, because the competition is high. Blood and bones, no surrender, guys are hungry and want to make a way out of the mud for a better future. That’s our common mentality.

Q: When and why did you go to Dubai, and how did it come about that you turned professional in Dubai?

A: I have always been a dreamer, day and night. I dreamt for a better life, to become a champ and help and inspire those behind me. Thank God I eventually found a way out. Initially I was going to Europe to continue my studies with my masters degree, but the visa did not work out and I even got my money crooked.

So Coming to Dubai was option B, with the hope to go to Europe later for my studies. But I got hooked up in the UAE, and gave up the Europe plan until today. Here I met a guy, Claude, from Cameroon who promotes boxing and he happened to be an ex boxer from the same boxing club as me. With his connections he got me my first pro fight in 2014.

A: Allow me to say that boxing in Dubai has been quite mediocre and overlooked compared to MMA where guys get much more credit and rewards. But thing seem to be getting better as the city is attracting world class promotions.

Cameroon got the credit of making so many champions including a large number of Olympic boxers. But the boxing game still got a long way to go compared to the giant football industry.

Q: From what I understand, you are also a fitness model and do fitness competitions. How does that work for you, alongside being a professional boxer?

A: After my second pro fight in 2014, I never had more fight offers. The gym I worked in was a mixed gym, combat and fitness.

Whenever I would take my t-shirt off for sparring or whatever reason, if by chance the fitness guys spotted me, they would advise me to compete in the aesthetic physique modelling stuff, saying that I have the physical package and the look of a winner.

I would laugh and reject that “senseless” offer. They would insist, and soon, because I had no fights, I decided to give it a random try and see, you know.

My first show was in the beach body division, and I won first place first time with not coaching. Just like that I was a champion among all those 36 good looking and well experienced guys. It was euphoric. You can’t understand that feeling. I thought I was special or ordained or something.

These guys had prophesied it right. From there until my comeback in boxing in 2018 I did over three years of competitions in various aesthetic fitness modelling shows, and I won many medals and trophies there.

I fought once in 2018 in Austria, started being more active in 2019 with a fight in Russia, and after that I met my current promoter and manager, Jose, and thanks to him I have been very active until this title defense last November.

Modelling and boxing at the same time is quite easy, I just have to eat right and do lots of cardio to stay in shape for any eventual call.

Q: Despite the global pandemic, you managed to box four times in 2020, and win and defend the UBO All-Africa Cruiserweight title. Was it difficult for you to keep focused, with all the uncertainty surrounding scheduling of boxing and sports in general?

A: It was indeed difficult right before my first title fight I had a broken rib during sparring. And a broken finger. I was tempted to give up, but to myself I was like “shut up Rolly, you have been dreaming to become a boxing champion all your life and now you want to coward away from this golden opportunity”?

So I swallowed the harsh pain and took the plane to Ghana, and thanks to God i won my first boxing belt, the UBO title.

It was even more special defending my belt with the pandemic and all these restrictions. The distance limit, plus having to work as a fitness trainer with theses restrictions is also very difficult. But God’s grace is always by the side of the believers, and they see a bright light at the end of any dark tunnel.

Q: How is life for you in Dubai? Do you have a family there? Do you go back to Cameroon often to visit family?

A: Well, Dubai is a very beautiful city. Life is good, but it’s still one of the most expensive places in the world. So to live good one has got to work really hard. I’m currently by myself, but I plan to go home soon to inspire my guys in the ghetto with my belt and make them dream further to get out of there. They are part of me.

Q: When you are not in training for a fight, what do you like to do in your spare time?

A: Between my fights I mostly work as a fitness coach and I do modelling here and there. And I also love reading and expanding my knowledge. I still have that university spirit haunting me and I love it.

Actually I’m writing a poetic book and looking forward to publishing it. That should be good for the boxing community, because most people consider boxers as empty minded fighting clowns, and good for nothing besides the ring.

A: In 2021 i have planned and I wish and hope that by the grace of God I will defend my title successfully again if the Covid-19 restrictions are loosened, to publish my first book and officially become a champion and published author.

Q: Is there something you would like to say in closing?

A: It’s my great honor to be champion in the beautiful UBO organization. it’s part of my history for ever. Such Friendly people, especially you who are interviewing me.

To all the Covid-19 victims, dead or alive, I wish you all peace and grace.

To any young fighter who will read this, brother/sister work really hard and dream! Dream above the sky, that’s your only standard. If you miss it up there, you surely will land with a handful of grace.