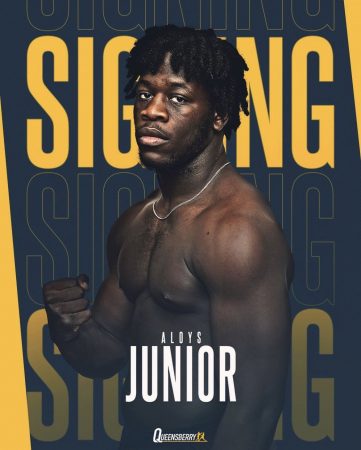 The 18-year-old captured the imagination of the boxing public back in November when, on his debut, he stepped in with the formidable, big-punching Pole Michal Soczynski at York Hall and ran the experienced former amateur heavyweight close over four rounds and was defeated by just a point.

The fearless Junior – officially known as Aloys Youmbi – momentarily hit the canvas in the first round, which ultimately had a significant bearing on the outcome.

The ferocious reputation of Soczynski was only amplified by his brutal destruction of Matt Sen at Wembley in July, which is why, Aloys concedes, a number of people thought he needed his bumps feeling for agreeing to such a tall order on his opening night as a pro.

“They did, they did!” said the Penge-based puncher. “I believe I put up a good performance and I felt I would give a good account of myself and my ability, which I did, even though I didn’t get the win. I think if I didn’t get dropped in the first round I would have come out with a draw or got a W.

“It was alright, it was all learning, all timing,” he added, before confirming that a more measured approach to matchmaking will be employed now he is under the promotional guardianship of Hall of Famer Frank Warren, although he insists he harbours no regrets.

“I’ve got to reverse a little bit and I am not going to have another killer again straight away. I am going to take my time, I am only 18 and the world now knows I can fight and I’ve got heart.

“I’ve got five years so I wasn’t wrong to take the fight. I am blessed that I have got a five-year deal with Frank and I honestly don’t regret taking the fight. It has taught me patience. I am young and, you know how young people are, it is very hard to be patient. Everyone wants it now, now, now.

“With time now I will keep learning and get experience. I want to leave a footprint in the cruiserweight division as a young up and coming prospect – even though I haven’t got my 0 – and I am still a beast, still an animal!”

A winner of four London titles, two National titles, along with international honours – “I have been around the block, you could say” – the eyes of Aloys were always fixed on the professional ranks and he will be back in action in March, on the soon-to-be-announced Queensberry show at York Hall, where he will set about the job of putting his pro account into credit.

“It was always my intention to turn pro at 18 as from the age of 15 I started punching at pros and thought ‘yeah, I really want to do this immediately’ and nobody can tell me I can’t do something.

“You could say it is a reset now, but a fight is a fight and I am always confident in my ability. I don’t feel any pressure. Now I am going to start properly and take my time to build it up.”