On This Day: Dennis Andries Defeated J. B. Williamson for World Title 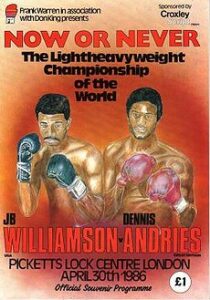 Dennis Andries vs. J. B. Williamson

Andries went on to defend the title in his next fight, successfully defeating Tony Sibson later on in the same year before losing in his next fight to all time great Thomas Hearns in March 1987.