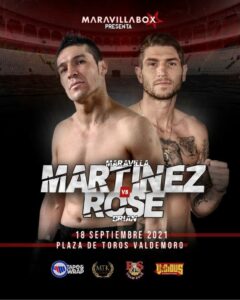 The War of the Roses card involves the third fight in the blossoming return of the garland winning Sergio “Maravilla” Martínez (53-3-2, 30 KO), holder of the WBC world belt at the beginning of the last decade.

There will be four professional fights that the promoter of the former world champion will present on September 18 in the Valdemoro bullring (Madrid).

Martinez will fight against former British world title challenger Brian Rose (32-6-1, 8 KO). It`s been made possible by the goodwill of MaravillaBox and Vicious Promotions, with the mediation of Ricky Pow, representative of the WBC. Pow has been key in the negotiations, with great support of Óscar Zardaín and Kieran Farrell.

In addition, the European Flyweight Championship will be contested by two Spaniards, Ángel Moreno (21-4-2, 6 KO) and Juan Hinostroza (10-9-1, 5 KO), a duel awaited for years.

Also Adrián Torres (2-1, 1 KO) is in his fourth fight as a professional, after a year and a half of inactivity. He will seek to continue on the good path, after a debut in which physical problems in the biceps caused defeat. Finally, Iker Fernández from MaravillaBox will make his professional debut.

The run-up to these four fights will be of great appeal to fans of new technologies, since there have been amateur contests with protagonists from the Internet world. Those will be amateur boxing matches that will be sanctioned as such.