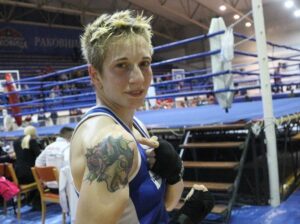 The new edition of the Belgrade Winner Tournament women’s semi-finals impressed all of the experts and caused several surprises in Serbia. Chile’s former Italian boxer, Valentina Bustamante is the first ever woman from the South American nation who won a title in a major international tournament as the Belgrade Winner.

More than 200 boxers attended in the international event including 87 female athletes in the Serbian capital. Altogether 35 nations sent their teams, and among them 24 competed also in the women’s part of the Belgrade Winner Tournament.

Valentina Bustamante claimed mostly silver medals in the Italian National Championships, and the strong boxer decided to switch to Chile. Once again, she represented her new nation in the Belgrade Winner Tournament where she exceeded all of the previous expectations and won all of her four matches.

Bustamante eliminated the experienced Croatian and Kazakh boxers during her road to the semi-finals in the Serbian capital. The lightweight (60kg) boxer used her energetic style in the last four against England’s sensation Youth Olympic Games winner, and AIBA Youth World Champion Caroline Dubois. Her English opponent never lost any international matches until their semi-finals which was the main sensation of the entire competition. Following her unexpected success over Dubois she was still hungry enough to take the gold medal, and Bustamante completed that mission against Greece’s Nikoleta Pita in the final. She became the first ever Chilean woman boxer to win a top international tournament.

‘I don’t have any words to express after this fantastic gold medal. I just want to say thanks to all the people who helped me to prepare, and also to my sponsors who believed in me and allowed to compete here. Thanks to my coach Fabio Paragnani who was at my corner, and he was always confident, and this is also his success,’ said grateful Valentina Bustamante after her final contest.

Tunisia’s Khouloud Hlimi is one of the best African female boxers to win the last edition of the All Africa Games and the African Olympic Boxing Qualifying Event. Her coaches decided to move her down to the featherweight (57kg) which was a fantastic decision, and since then Tunisia’s No.1 has won plenty of international events.

Hlimi had four opponents in the Belgrade Winner Tournament, and she was able to manage the perfect tactical skills against all of them. She defeated Hungary’s Szabina Szucs, Mali’s tall Fatoumata Camara, Uzbekistan’s Makhliyo Khabibullayeva, and finally Russia’s Liudmilla Vorontsova. Her final opponent claimed silver medal in the last edition of the AIBA Women’s World Boxing Championships, but Hlimi’s smart strategy delivered a gold medal for the Tunisians.

The Russians sent 14 female boxers to the Belgrade Winner Tournament, and among them three succeeded in the finals. Two-time AIBA Women’s World Champion, Zenfira Magomedalieva was too strong for all of her opponents including Uzbekistan’s promising Mavluda Mavlonova in the final of the middleweight (75kg).

Anna Ivanova had to beat her National Champion rival, Dulma Lumbunova at the light heavyweight (81kg) which was also a selection match between them. AIBA Women’s World Boxing Championships bronze medallist, Kristina Tkacheva returned after a short break, and she defeated her Uzbek and Czech rivals in the heaviest weight category.