Fight Notes: Cacace was in command, putting Woodstock on the deck in round 4. Woodstock showed bravery to go the distance but Cacace was not to be denied. The judges scores were 117-110 x2 and 117-111 for a Cacace unanimous points victory.

Fight Notes: Heaney was in full control from the beginning, dismantling Alexandrov each passing round. In the 5th round, a head to body attack put Alexandrov down for the full count. Time of the stoppage was 1:36.

Fight Notes: Bance was in command all the way with the bout going the 4 round distance. Bance won by the referees scorecard of 40-36.

Fight Notes: Yarde made quick work with Theran no being able to take Yardes power, flooring him twice, the second time for the full count.

Fight Notes: Ennis-Brown ROBBED. In a scrappy affair where heads clashed, Ennis-Brown was cut in round 4 and Maxwell in round 9 from accidental head-clashes. Ennis-Brown seemed well ahead only for the three judges to award the fight 116-113 x2 and 115-114, all for Maxwell.

Covering the fight in the studio, Carl Frampton had Ennis-Brown a winner by five points with Steve Bunce agreeing. I had it slightly closer with Ennis-Brown three points ahead but a clear winner.

Maxwell said: “I’d give him a rematch. He’s a good competitor, but it would be the same result again. I’ve got the beating of him. A lot of people wanted me to win and I’m sorry I didn’t get the knockout, but we got the win and that’s the main thing.

“I’m so proud. Me and Steve Maylett have been doing so much in the gym. The lads have been there with me as well for all of the hard sessions, and this is just the start.

“I feel like I’m dreaming. I haven’t boxed in front of a crowd for two years, and I’ve dreamed about it since I was a little kid. It went exactly how I thought it would. I knew he would be a tricky guy, but the judges were scoring the clean shots.”

Fight Notes: It was Davies all the way from the first bell with Davies finally knocking Commey down in the 2nd round. The referee immediately waved off the bout with the time of the stoppage being 2:52. 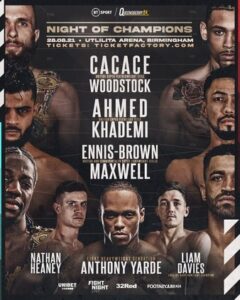 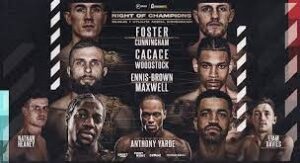 Queensberry today held the final press conference ahead of Saturday’s (Aug 28) ‘Night of Champions’ card at the Utilita Arena, Birmingham, live on BT Sport 1 from 7:30pm.

Telford’s English Bantamweight champion  Telford’s Liam Davies (9-0, 4 KOs) boxes an eight rounder and Stoke Middleweight Nathan Heaney (12-0, 4 KOs) will have 1600 fans supporting him in the arena when he fights.

FRANCIS WARREN: “Akeem Ennis-Brown v Sam Maxwell is contrasting styles. Sam is always switched on and you have to respect Akeem’s style. It is a great fight. I am so excited for Anthony Cacace and Lyon Woodstock’s fight. It has been rescheduled and finally we’re here. We have two very tough men who will give it all. A rematch between Lyndon Arthur and Anthony Yarde is a massive fight, but let us get Saturday done and dusted. The rematch is contracted and we are focused on getting it on. It is a terrific show, three British title fights and Anthony Yarde. It’s worth tuning in for.”

ANTHONY CACACE: “I have no worries about being rusty after a lay-off. I have been boxing 20 years and this comes second nature. I am used to the big stage and raring to go. I felt like I was never going to defend this title. It’s been bad luck after bad luck, but I have trained hard and I am ready for what Lyon brings. I will do whatever I want with Lyon. I can fight him, box him but I respect what he brings to the table. I will win and it doesn’t matter what way.”

LYON WOODSTOCK: “I more than confident I will take the title. I don’t believe in the whole idea of ring rust because we’re both warriors. This is like a tribal thing, mine against his. I respect him as a warrior and gladiator. On Saturday, two tribes are going to come together and go to war. I have experienced high and lows. That is what builds your character and the loss to Zelfa Barrett was part of the journey. Hand on heart, I haven’t thought past this fight. It is all or nothing and going to be great.”

AKEEM ENNIS BROWN: “Of course I respect Sam. I respect any fighter who gets in the ring because it takes a lot to do that. I think I have the superior record and that is a fact. This win should give me the platform to go and get bigger fights. Some of the wins I had should have put me in that position, but somehow I still get avoided. I am not worried about his power. I love a challenge and that gets me excited. I have the style to nullify any fighter. He is getting beat up and knocked out. I am going to punch him up.”

SAM MAXWELL: “Everything Akeem brings to the table I have seen before. I have the amateur experience and feel I have boxed at a higher level in the pros. I was prepared for it (Akeem to try and get under his skin) because I knew what type of character he is. I called him a clown but I didn’t expect him to dress as one today. I am being underestimated going into this fight. I thrive on being the underdog. He is a weak man. His record tells you that and he has nothing that will trouble me. I am going to knock him spark out and hurt him. When I win this it is dream achieved and it will open up bigger opportunities.”

ANTHONY YARDE: “The biggest excitement for me is having fans back because they play such a part. It’s about entertaining so when you hear the crowd roaring it lifts you. We have made some tweaks but training has gone fantastic. I have always enjoyed a laugh and joke in training, but we know when it is time to be serious. I always enjoy the job. For me the focus is Saturday because I have a decent opponent.”

TUNDE AJAYI: “Anthony has always been dedicated to boxing and his work ethic has never changed. Having James Cook in the training team has added to everything . His experience has been invaluable. You can’t buy that. I’d be lying if I said the Arthur rematch wasn’t in our heads, but in terms of the training and preparation has been this weekend.”