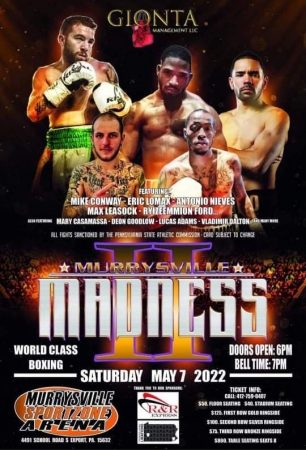 Professional boxing returns this Saturday night (May 7) to the Pittsburgh market as Gionta Management presents, “Murrysville Madness II,” at the Murrysville SportZone in Murrysville, Pennsylvania.

The 31-year-old Lomax is a throwback fighter who entertains fans and pressures his opponent with power in both hands, while Aguilar represents a step up in terms of a quality opponent for Lomax. Aguilar is coming off a 4-round draw this past February against an undefeated opponent, 5-0 Edel Gomez.

The 6-round co-feature has all the makings of a real barnburner. Danny “Feel Good Hollywood” Rosenberger (8-9, 2 KOs), fighting out of Youngstown, Ohio, will take on Maryland middleweight Jonathan Ryan Burrs (4-4, 1 KO).  Both bring the heat and rarely take a step backwards.

“We’re happy to be returning to Murrysville SportZone for our second show there,” promoter Derek Gionta said. “They are great to work with. Lomax is always in exciting fights and Aguilar will be Eric’s toughest test to date. Burrs vs Rosenberger is going to be a really good fight, too. I’m excited for Mary Casamassa’s pro debut on our show. I’ve known her since her amateur days. I did some matchmaking for her over the years for Golden Glove events and other shows.  We recently signed a deal with her and look forward to the future” 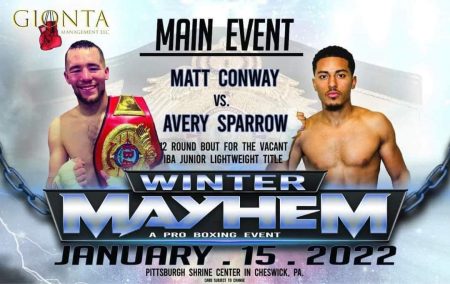 The scheduled 12-round main event was an old-fashioned battle of cross-state rivals, Philly’s Sparrow and Pittsburgh’s Conway.

Sparrow came out taking advantage of his considerable length advantage, jabbing effectively to rack up points round by round. Sparrow caught Conway with left hooks in the second half of the fight, hurting him in the 10th round. Once Conway was sent backwards to the ropes, Sparrow blasted him with 10 unanswered punches, until referee Chris Riskus waved off the fight. Sparrow led in scoring going into the 10th by scores of 89-82, 88-83 and 87-84.

Sparrow won his first fight in more than three years, when he took a 10-round majority decision over fellow Philadelphian Hank Lundy (29-7-1), snapping Conway’s 3-fight win streak in the process.

“This was our best show yet,” promoter Derek Gionta said. “We had a great crowd at a first-class venue. The main event was a great fight and give credit to Avery and his team on a well-deserved victory. It was a contrast of styles between him and Conway. The slick counter-puncher prevailed in the end over the aggressive pressure fighter.”

“Matt had a very busy 11 months, dating back to last February, going 3-1 with this one being a 12-round title fight. He will look to regroup and resume his career possibly at 126 pounds as he has no trouble making that weight. That will be a decision he and his team will make.”

“I’m eager to see what Avery does next and who (his promoter) Russell Peltz matches him up with as I feel his best days are ahead of him. We were proud to hold such a high-level fight on a regional club show in Pittsburgh. All parties involved were true professionals. My wheels are already spinning for the next show.”

In the co-feature, Alliance, Ohio lightweight Ryizeemmion “The Humble Beast” Ford improved to 7-1 (5 KOs) by stopping an overmatched Charles Clark (3-9-1, 1 KO) when Clark’s corner threw in a white towel late in round one. Ford controlled the fight with his long jab and sharp combination punches to the head and body over a usually game and durable Clark.

Illinois heavyweight Anthony Hollaway (4-2-2, 3 KOs) overcame a 42-pound weight disadvantage against Thomas Hawkins (4-10-1, 1 KO) to take a 4-round unanimous decision. Holloway controlled the action from start to finish against a game Hawkins and mixed in some good power shots in spurts while eluding counters from Hawkins. Hawkins showed some spark with his left hand at times, but Hollaway was too skilled.

Lightning quick super featherweight Alexander Castellano (6-1, 2 KOs) started strong and never took his foot off the pedal versus Shawn Rall (1-5, 1 KO) as the former pitched a shutout, winning each round on all three judges’ scorecards. There were no knockdowns and neither fighter was hurt at any point. Rall put up a game performance once again.

Portugal super featherweight prospect Milton Jorge Andrade Jeremias (3-0, 2 KOs) remained undefeated as he used his 8” height advantage against an elusive and rugged David Boria (0-5), of Ashtabula, OH. Jeremias owned the first two rounds, but his Ohio opponent came back strong in the third round, rocking Jeremias with a solid head shot, and he carried the fight to the final bell. Jeremias won a 4-round majority decision. 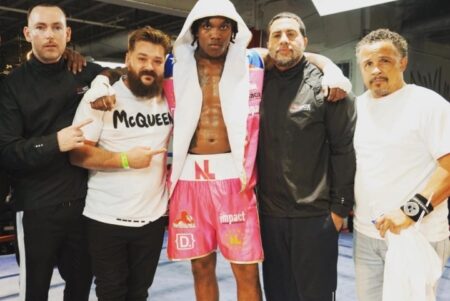 Rising prospect, Najee Lopez (2-0, 2 KOs), continues to turn heads as a professional, as he scored a dynamic second-round knockout last night, Friday, November 19, 2021, against Anthony Hollaway (3-1-2, 3 KOs). The 4-round bout has the main event and took place at Buckhead Fight Club in Atlanta, GA, Lopez’ hometown, and was promoted by Garry Jonas of Pro Box Promotions.

“I’m coming fast and hard at cruiserweight. People will soon mention me with the likes of Usyk and Evander Holyfield,” said Najee Lopez after getting a knockout win that saw his opponent fall through the ropes.

“My team really expected to get more rounds out of this guy, but I knew I was going to stop him early,” Lopez continued. “I am humble, but I know what I want from the sport, and now it is just about getting there. The first step is winning, and the second is winning in good fashion. There is a lot of work to be done, but I’m ready for whatever my team has in store for me.”

Lopez, a former amateur who was a stand-out at the “Last Chance Olympic Qualifiers” in Oxnard, California, in 2019, turned heads at that event. Forgoing further endeavors into the amateur realm, Lopez turned pro, and is managed by Tim VanNewhouse. 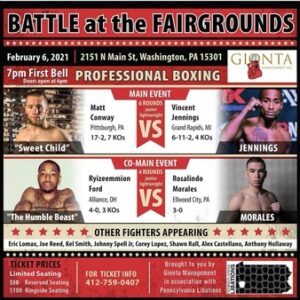